10 Years of Sketching Together

Although Urban Sketchers Seattle has sketched at Gas Works Park many times, today’s outing was a little special: We celebrated our 10th anniversary of sketching together! In July 2009, Gabi Campanario launched the USk Seattle group a couple of years after officially starting the global Urban Sketchers organization. His very first post on the USk Seattle blog in May 2009 explains the impetus:

"Since launching Urban Sketchers last year I've been thinking that something important was missing from the original idea. Then I realized what it was. The main blog brings people from far away places together, but it doesn't necessarily connect the ones who are actually closer to each other, living in the same city. That's the reason behind starting this blog and perhaps others like it for other cities. With USk Seattle I'm looking forward to continue the friendship started back in March of 2008 with fellow local sketchers and to meet new ones in the future."

After that first post, several early USk members began posting on the blog, and then in July 2009, the first formal USk sketch outing was organized at Fishermen’s Terminal. The rest, as they say, is history. Our Facebook group now has 536 members, our Google group has 310 members, and our Flickr group has 274 members. Our blog has 59 correspondents.

A couple dozen people, including one new member, sketched the park and then picnicked after the throwdown to celebrate. Five participants in that inaugural Fishermen’s Terminal outing were present today, too: Gabi, Frank Ching, Gail Wong, Dave Morris and Mark Ryan.

Sketching the park entrance and shelter from halfway up Kite Hill, the sound of a girl’s colorful kite snapped in the wind high over my head. The temperature was 70 degrees, and the sky was nearly cloudless. As I sketched, I thought about how much fun I’ve had and all the new friends I’ve made since I joined Urban Sketchers. I’m grateful to be part of such a rich community of people to share this passion with. Here’s to many more years of sketching together! 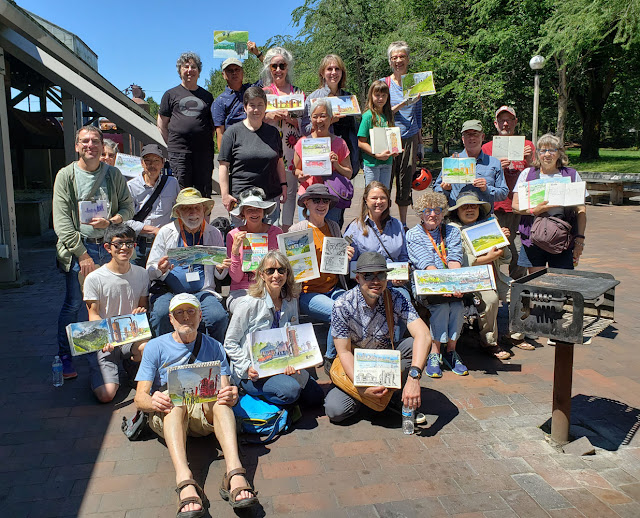