Falling in Love with the World, Part Two

Twelve years ago, in November 2009, my sister mentioned something she'd seen in the newspaper. This guy, the Seattle Sketcher, was inviting people to sketch at Volunteer Park the following weekend. Was I interested?

In some ways, my first sketch outing was the re-kindling of an old flame -- like meeting up with a former beau and starting up where were left off. I'd been drawing since I was a kid. I studied art in college -- drawing, painting, printmaking -- but not being confident enough to believe I could earn a living at it, I expanded my interests enough to get an unfocused degree from a local liberal arts college. I continued to draw quietly. I was a closeted sketcher.
In 2005, my son returned from college study-abroad in Italy and brought me a deliciously creamy handmade paper sketchbook from the Amalfi coast. I took it with me on a trip to China in 2006 and made a few simple sketches.
Then came 2009 and the sketch outing at Volunteer Park. I didn't know what to expect, but I was excited. That day I met other folks who I knew what it was like to be taken aback at what they saw, put a pen to paper, and record it. And better yet, there was no need for a studio, easels, or special lighting. The world was my studio and there was a reason to sketch -- to share other sketchers. The practice was simple--meet up, sketch, share, post. That's it. 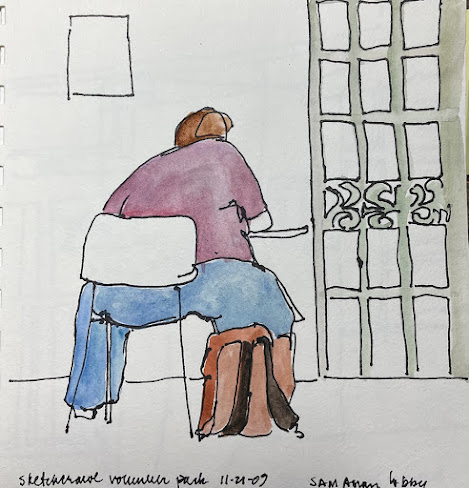 Due to Seattle's notorious November drizzle, we held our 2009 throwdown in the now-closed observation deck of the water tower at the south end of the concourse. The guy, Gabi Campanario,  gave us credentials to sign in to the blog he had just created for Seattle Urban Sketchers. He explained the manifesto. I immediately signed on and then volunteered to start a Facebook Page for the group. I was happily hooked on sketching and I was committed to driving the 120 miles round-trip for every outing I could.
I've come to understand that this aspect--falling in love with what you see--is, for me, not only a side effect but a key component in the art of sketching. Frederick Franck, author of The Zen of Seeing calls it identification

"To find the essence, the artist needs the grace to obey the reflex with ever increasing sensitivity, coordination, and freedom. The reflex begins in identification. I have to become the apple, then draw the apple, yet remain myself. What applies to the apple, of course, applies to a figure or a crowd. Where identification is missing, I stumble, and find I cannot draw a line."

- My Eye is in Love,  by Frederick Franck. 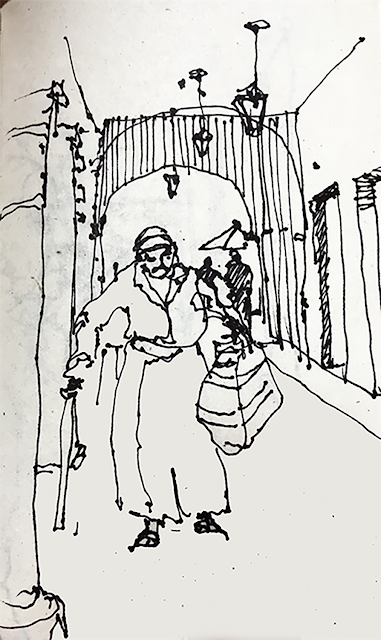 I find if I slow down enough to connect with what I'm drawing as I'm drawing it, my hand records what I'm seeing/feeling. That is the reward of drawing from life.
Sure, I have grown as a sketcher over the past 12 years -- I've gotten better at remembering principles of composition, color theory perspective. But the real value for me is experiencing the activity of seeing/drawing/drawing.
I hear people say it in many ways. They remember the whole experience of being on location--the sights, smells, sounds. When they look at old sketches the experience comes back to them with all the senses ignited. When they sketch it's like a meditation. They slow down; they're in the moment.
Sounds like love to me.
I sketch a lot now. It makes me feel alive. It rekindles my love of life. I've sketched in places I never thought I'd see. I've made connections with people who know what I'm talking about.
To honor this past twelve years with urban sketchers, I re-visited the location of my first sketch outing, Volunteer, that expansive Olmstead park on Capitol Hill in Seattle. I love the natural setting, the Seattle Asian Art Museum, the Water Tower at the south end of the concourse, and of course, the Volunteer Park Conservatory which was modeled after London's Crystal Palace. 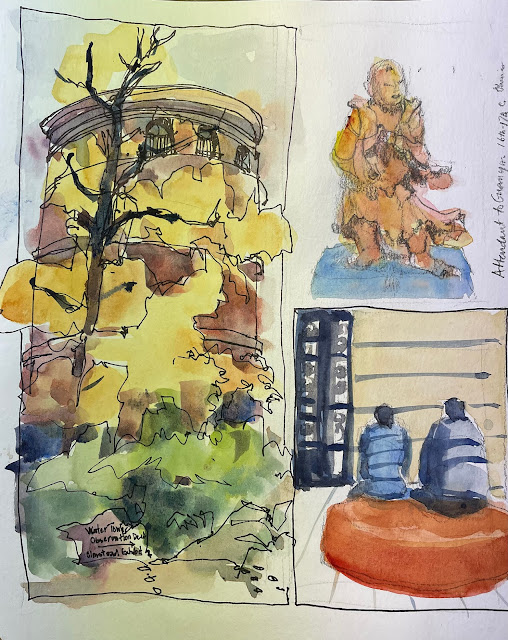 When I visited the other day, it was unusually cold. I chose to draw some of the same subjects I had drawn in 2009. but took the most time with the Conservatory. It was a challenge.  November nostalgia painted the skies grey, but the room of poinsettias tinted the windows. While I sketched I was totally focused. Until shivering took over, 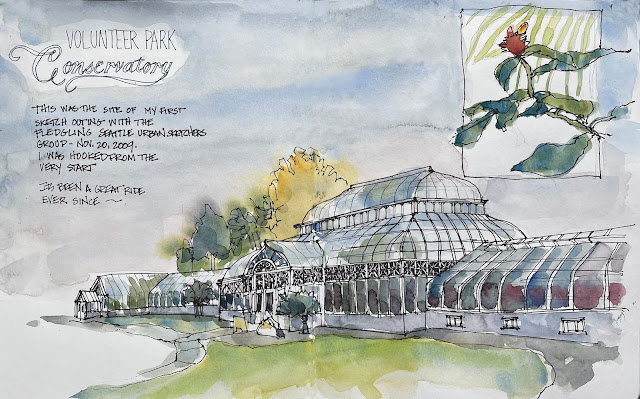 I was in love . . .  with yet another corner of the world.
Falling In Love with the World, Part 1
Posted by Jane Dillon Wingfield: janewingfield@gmail.com 5 comments


On my way to an errand, heavy mist gave the morning a soft, muted look almost like fog, which I’ve had fun capturing in the past. By the time I finished my brief errand, though, the mist had turned to full-on rain. Undaunted, I pulled over anyway. After all, it was trash day in Maple Leaf.
Posted by MiataGrrl 0 comments

After wind and rain battered the windows noisily all night, this morning dawned to yet more “atmospheric river” conditions. It was the kind of morning when I would have preferred to get a second cup of coffee and keep reading the paper, and I wondered if I would be alone at Northgate Light Rail Station. Shame on me for doubting: Urban Sketchers Seattle isn’t daunted by a little rain (and by “little,” I mean the kind that causes riverbanks to flood)! Seeing all my fellow sketchers was encouraging and invigorating! I forgot all about my previous reluctance to leave the house and opened my sketchbook.

Through a wide window on the ticketing floor, I found a great view of the unsheltered John Lewis Memorial Bridge (above) where, strangely, no pedestrians seemed to want to walk.

On the opposite side of the station was another good view, this time of the blue parking garage elevator and a glimpse of a light rail train before it pulled out of the station.

Although Northgate station has many sheltered areas, that river of rain was flowing horizontally most of the morning, keeping the air moist even under cover. Sometimes I like to pre-spritz my sketchbook page with water for special effects with watercolor pencils, but the weather seemed to do the job for me: The paper felt thick and damp as I drew.

For the remaining time, I switched to a brush pen to capture people (mostly sketchers) on the ticketing level. By then, I’m sure all of us had memorized the endless loop of recorded announcements: “Holding doors delays trains for all riders. Sound Transit does not tolerate harassment. Please report any harassment to security or transit employees.” 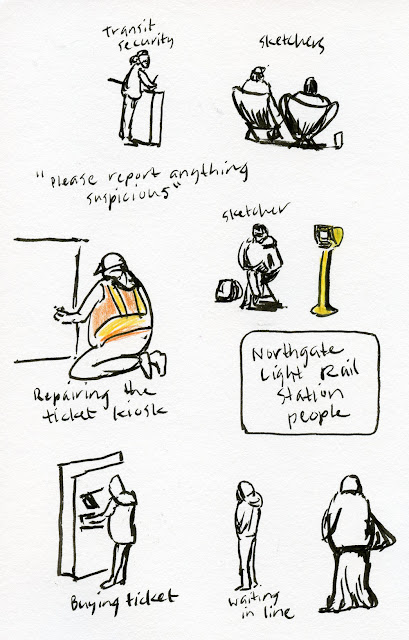 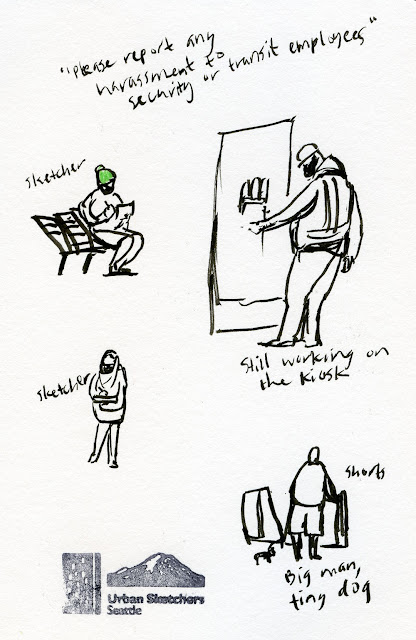 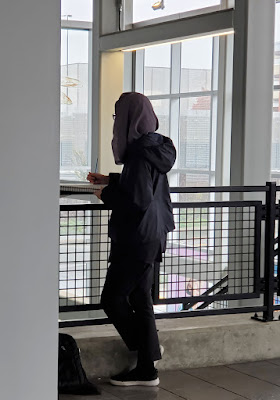 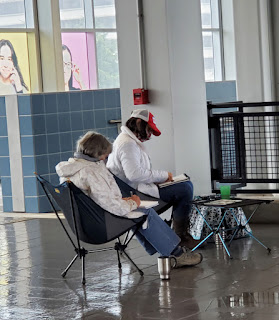 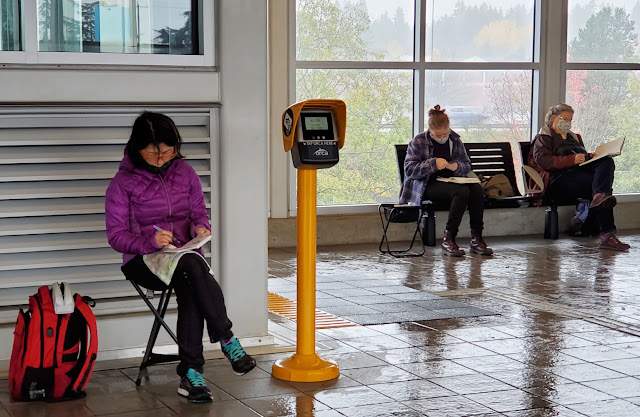 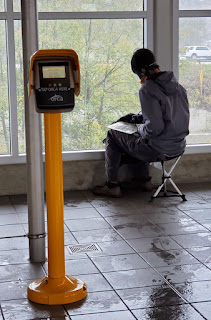 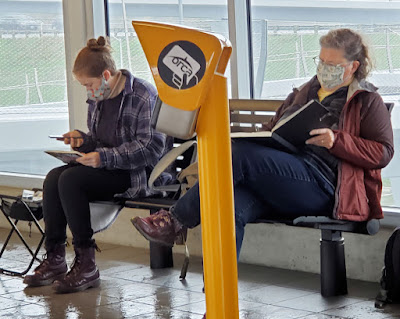 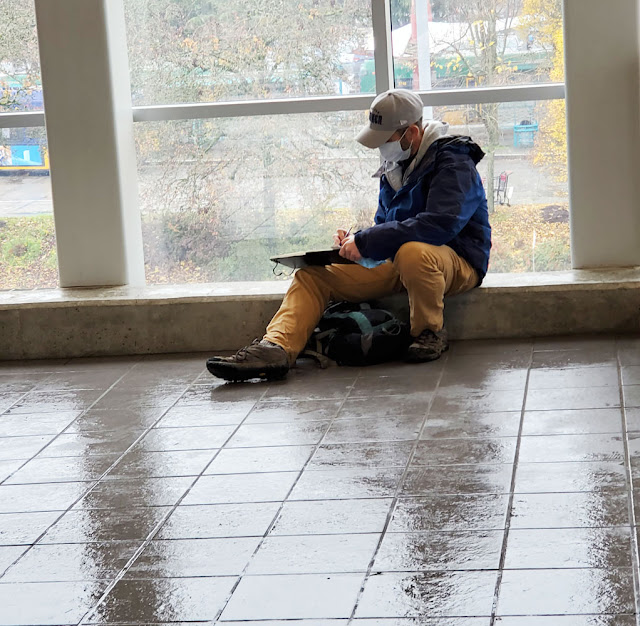 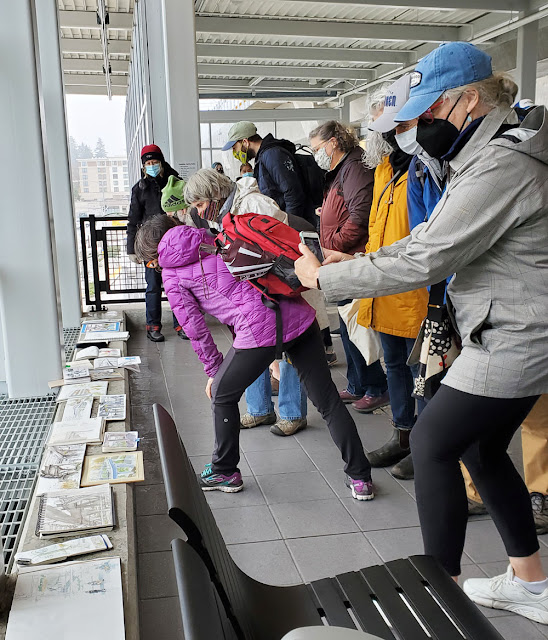 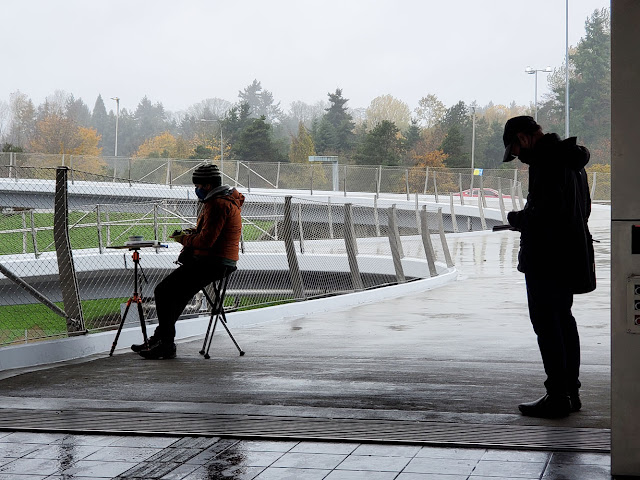 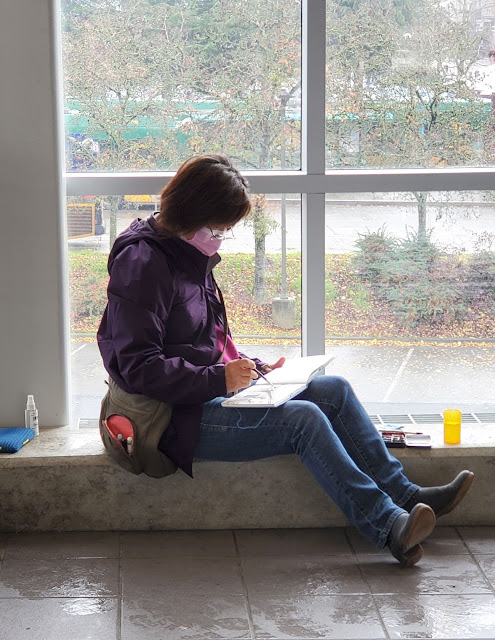 This morning was again unexpectedly sunny, especially after yesterday's wild weather. It seemed another good day to go out to sketch.

First I stopped at a bakery I used to frequent a few years ago.  I sketched the truck with pumpkins, even while they decorated for Christmas.  It seems like a lot of people and places have decided to decorate right after Halloween...the prevailing attitude I've heard expressed is it's a pandemic and we need the cheer sooner rather than later.  I'm wanting until after Thanksgiving, though. 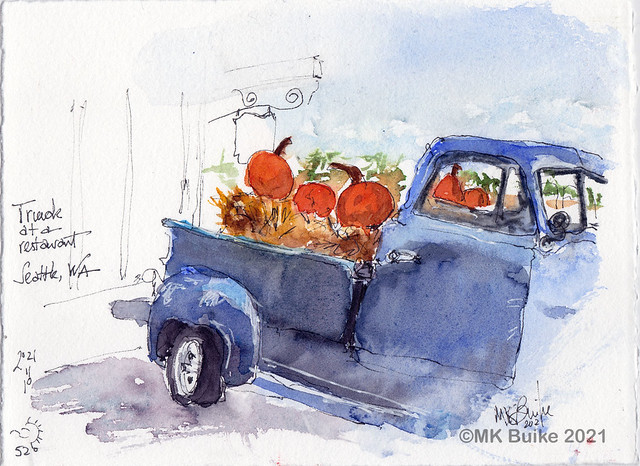 Since the weather was still good, I headed for Seward Park, where I drove through the park, along roads I'd not explored before.

I ended up parking on the street next to the Lake Washington Blvd trail.  I wanted to sketch these Chinese stone lanterns I've noticed before. 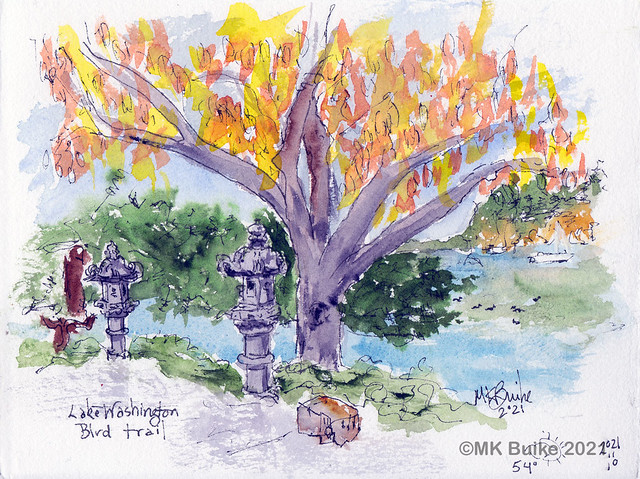 Took a week off from work this summer and spent it on Lopez Island.  I had never spent anytime on Lopez before, but really enjoyed the slow pace and the friendly islanders.  There were many excellent locations for "urban" sketches in the village and water view locations around the island. 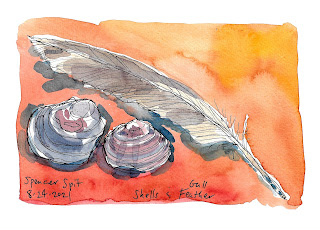 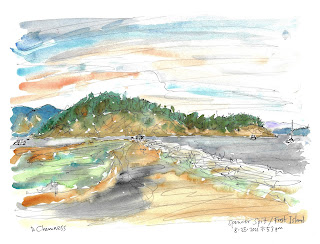 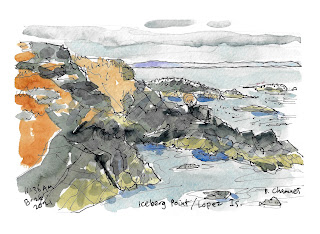 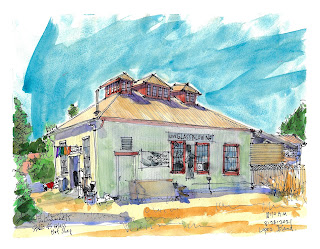 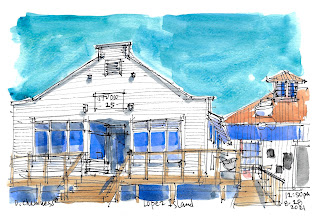 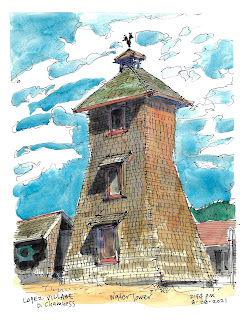 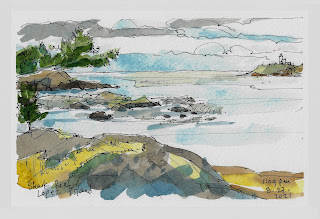 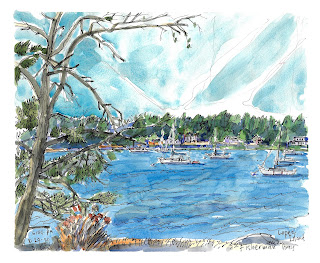 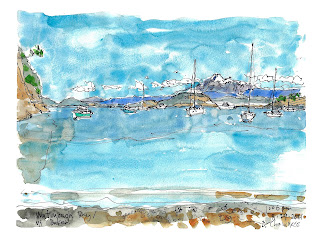 The Story of One Maple

Our days of high winds and heavy rain did a number on many trees. When I walked around Green Lake today, I saw lots of newly bald trees as well as torn limbs strewn across the path.

I went to check out the same maple in the ‘hood that I’ve been watching: Just a few yellow leaves are barely hanging on. This is probably the last time I’ll sketch it this year, but if I remember next spring, I’ll continue this story of one maple.

Previous sketches are shown below.


Today was the international Urban Sketchers 24-hour event, USk Sketch Together, with sketchers around the globe taking part with live videos and images from their respective sketch outings. USk Seattle chose iconic Pike Place Market for our event. The forecast all week was for rain, but once again, the weather gods were with us: Not a drop!

Before the pandemic, I used to happily sketch people on buses and light rail trains whenever I had somewhere to go. Throughout the wet-weather months, I had taken for granted being able to draw people in coffee shops. The thing I missed most during the worst of the pandemic was sketching people in public. For Sunday’s outing, I decided it was time to get back on public transportation. As a personal celebration during the Sketch Together event, I dedicated the outing to sketching nothing but people. In fact, I used the “observational cartooning” technique I learned from Taylor Dow in his workshop a couple of weeks ago to help tell the story of people at the Market: drawings made from life combined with written commentary.

On the level below the Market Commons, I could look up at a corner of the pedestrian area with one of the best waterfront views (at right). It turned out to be a popular corner to take selfies and other photos. I started there but realized quickly that my view was limited.

Next I got up on the upper level myself so that I could see and sketch more people, especially their various photo stances – both taking and posing. Many were selfies, but others were couples and families who asked a passing stranger to snap a photo for them. When I wasn’t sketching, I timed a few: On average, I have about six seconds to capture a selfie. If someone else is taking the photo, I have a bit longer. The typical pose for couples is for one to put an arm around the other. When couples take a selfie together, they snap one, then usually one person is more interested than the other in the result and often needs a retake. I had as much fun people-observing as people-sketching. 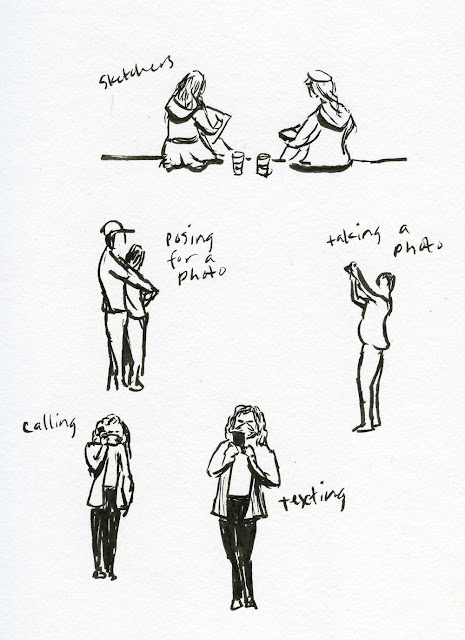 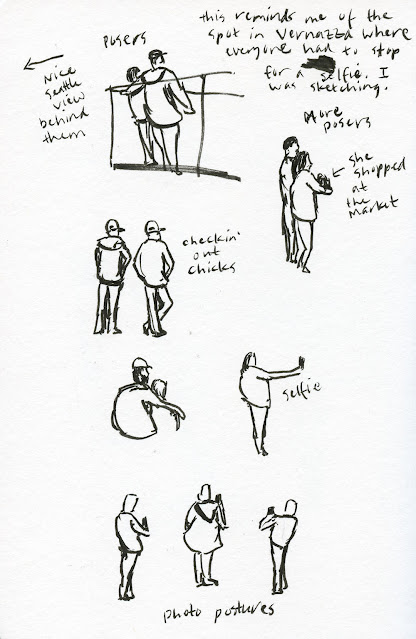 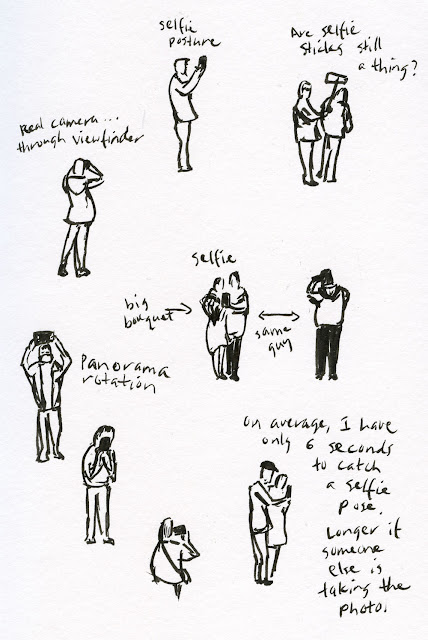 To see what the rest of the world sketched that day, search the hashtag #usksketchtogether. 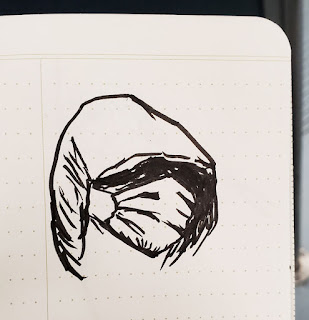