My husband and I took a 3 week trip to Germany to see the Christmas Markets.  We were gone 27 November to 18 December.  This is a summary of the trip.  For the full account, see multiple recent posts on my personal blog, which include links to the photo albums, too.

We lived and worked in Germany from 1981 to 1986 and we've been back a couple times since, though not for many years now.  One of the experiences we missed were the Christmas Markets so that was the motivation to travel at this time of year.

Departure day was 27 December.  The trip was not as bad as what some have experienced, but I believe this was our worst trip ever due to delays. I managed only one sketch at SeaTac.  I certainly could have done a lot of people sketching.  But I do not like flying and all this delay and anticipated missed connection gave me low level anxiety that just didn't have me in the mood to draw. 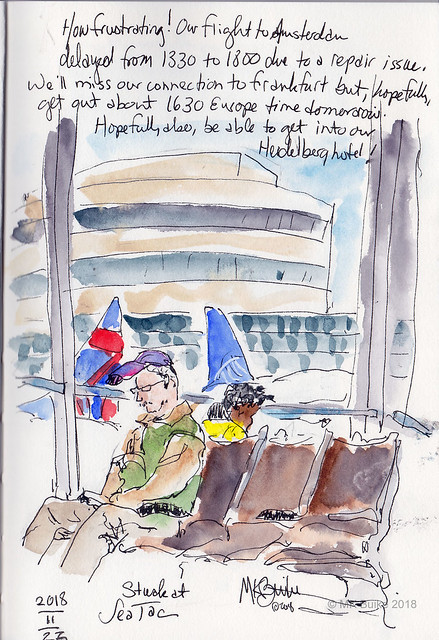 One of recurring themes was the prevalence of Lamy stores and displays!  I encountered a rather large display at the Frankfurt Airport.  They were also in every Karstadt (a department store chain).  Our first stop was Heidelberg and my first outing the morning after we arrived was the Lamy Flagship store.  Lamy HQ and factory are on the outskirts of the city but not open to the public.

I got to pose with the big pen.  Lamy also sent one to The Goulet Pen Company and Brian Goulet posted about it on Instagram. It's taller than I am!

My first sketch was earlier that morning out the window of our hotel.   The sky was clear and there were subtle colors of the sunrise. 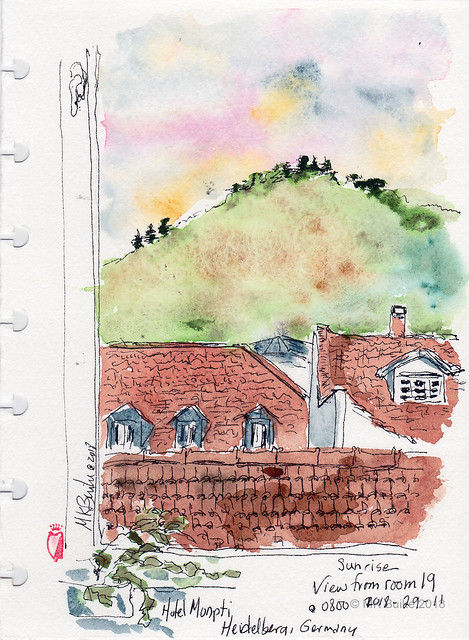 We moved on from Heidelberg to Dinkelsbühl, which is a walled city that survived the 30 Years War.  It is described as the German's Rothenburg as it is less touristy.

This is our street and hotel. 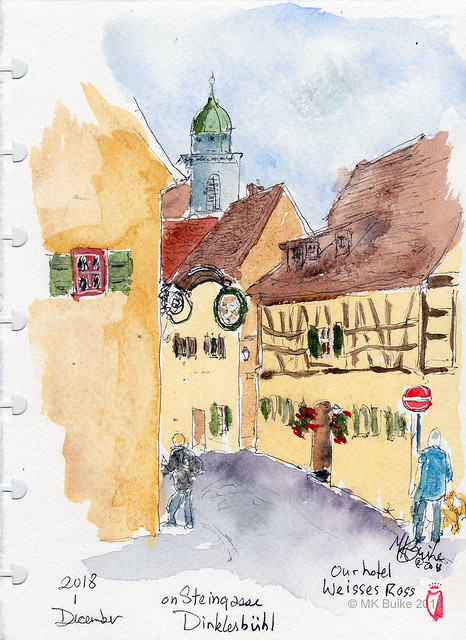 After wandering around town, lunch at Weib's Brauhaus, which was close by. I did a sketch of the decorated window within view of our table. 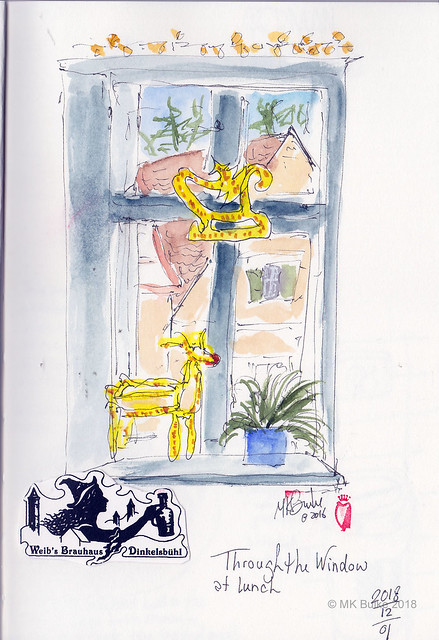 The next day I sketched one of the city gates. And then sheltered under the porch of a shop as it started raining. That was looking down the street to the markt platz and the Christmas tree. 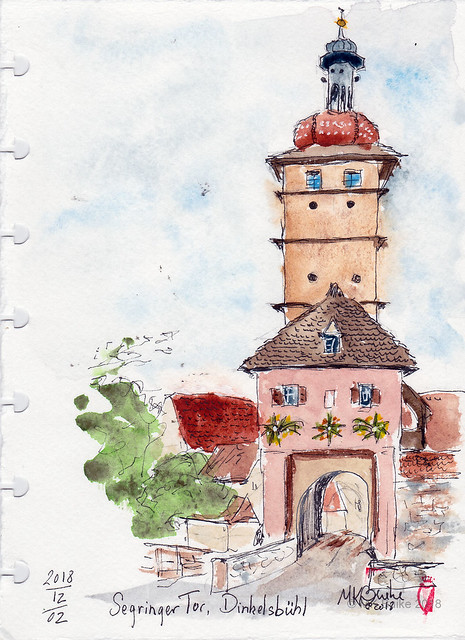 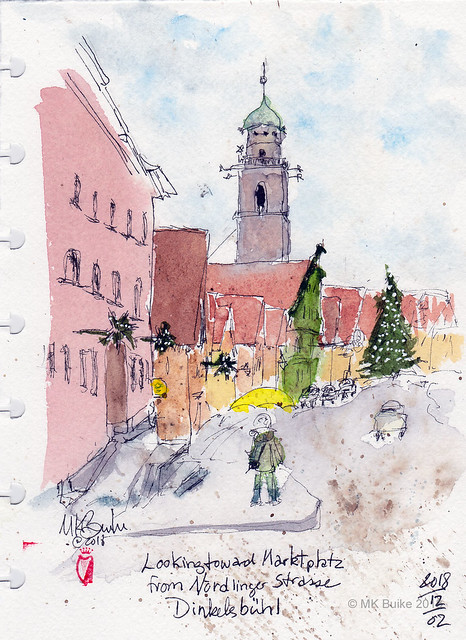 On the way from Dinkelsbühl to Nuremberg, we stopped in Stein, the location of the Faber Castell HQ and factory.  There was no tour available for either the Castle or the factory.  But I did shop in the store.  If you want to read more about that, see this blog post.

It was raining Tuesday morning, 4 December, so we waited until about 1300 to go out. I did a sketch of the view out our window while we waited for the rain to pass. 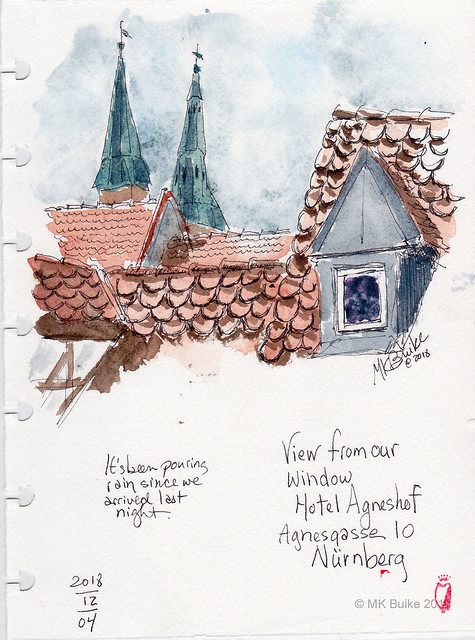 Walking through the shopping district, we passed a Staedtler Welt (World) store. In the window was a man in period dress making pencils in the old fashioned way. "The roots of the name can be traced back to 1662, the year in which references to Friedrich Staedtler as a pencil-making craftsman were made in the city annuals of Nuremberg." 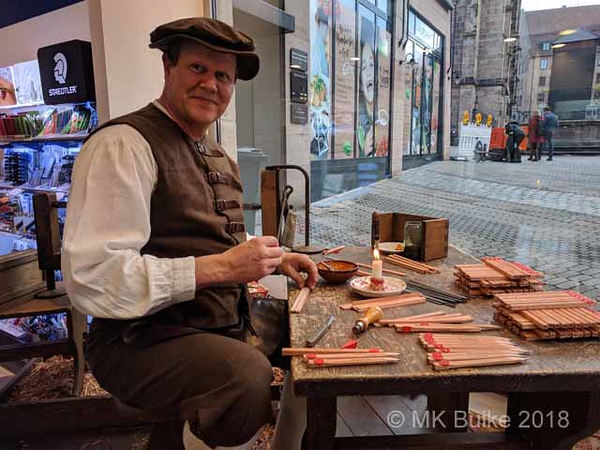 Later in the afternoon, I went to the Durer house. 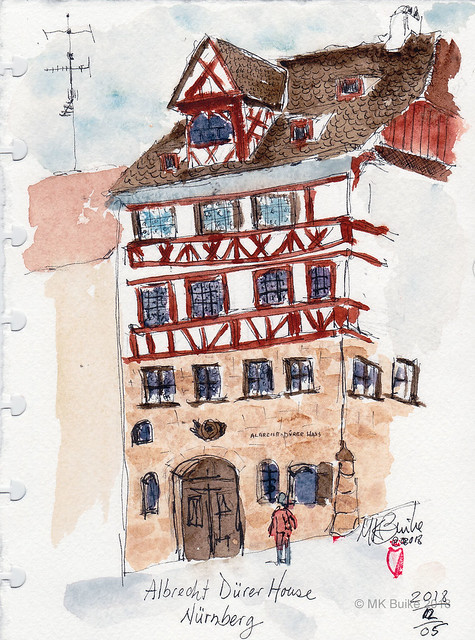 Our next move was on to Trier. Himself doesn't normally take selfies, but he relented during this trip and we took several.  But I'll only share one here: at the Trier Christmas Market!

The next day was predicted to be a rainy day, so spent a few hours at the archeological museum. I did a sketch of a famous 3rd century sculpture: The Wine Ship. As usual for museums, only pencil was allowed.  So I left the sketch as is. 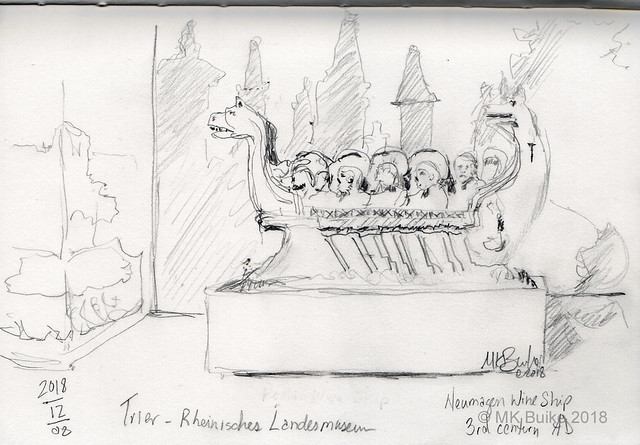 We next moved on to the medieval Mosel village of Bernkastel-Kues.  Actually, it's two villages, separated by the Mosel.  We stayed in the less interesting Kues.  But it was a short walk over the bridge to the old town of Bernkastel.

Monday, 10 December, was perhaps the best weather day yet.  Though it was only about 45 degrees, it was sunny.  I walked over the bridge from Kues to Bernkastel.  I sketched one of the most photographed buildings there:  the Spizhaeuschen from 1416.  I sat at a table outside a closed cafe.  This was my view most of the time:

With patience, though, I got it done. 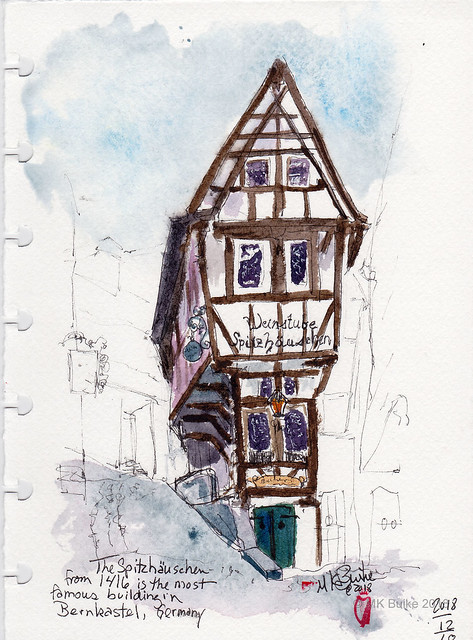 On my way back across the bridge, I stopped half way to sketch the view back to town with the castle ruin above.  There was a convenient bench right there. 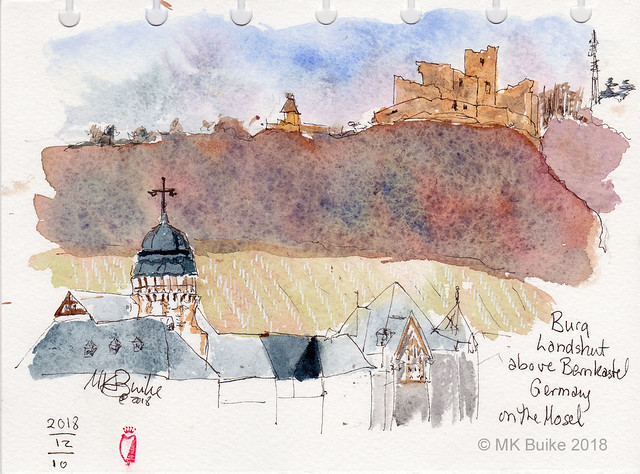 Next on our itinerary was Cochem, also a medieval town on the Mosel. It's most famous feature is the castle.  I've been in it before but now it was closed for the season.   I sat on a step that is probably part of a small dock or tie up location for boat(s). It was so cold, I only got part of it done before my fingers were frozen.

Back to the hotel to warm up and then went out again in the afternoon to finish. This is one of my favorite sketches of the trip. 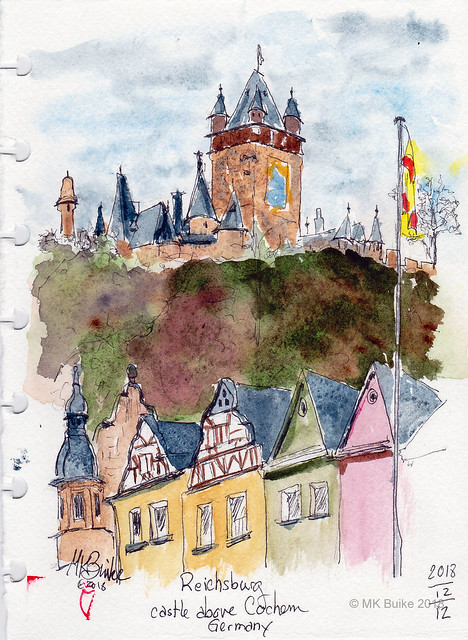 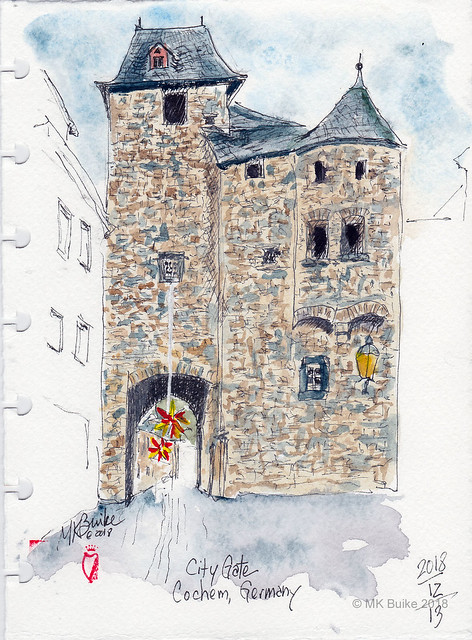 The final stop was our former home area and we stayed just outside our town of Kusel in a hotel that was a favorite even then, 30+ years ago.  Part of that stay were two visits to our former "home" castle, Burg Lichtenberg.  It's one of the largest castle ruins in Germany by size of area.  There are two boundary walls.  This is standing on the inner one. 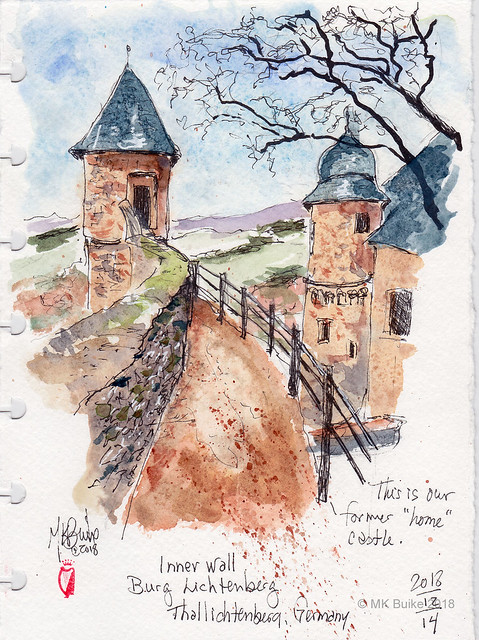 Fortunately, our trip home was uneventful.  I look forward to seeing everyone at a sketch outing soon.
Posted by MK Buike