Japan, This Time with Sketchbook


Although my husband Greg and I have visited Japan four times, everything about the trip we just returned from felt new to me: It was the first time I took a sketchbook. It all seemed a little familiar, and yet somehow fresh.

The first half of our trip was spent in Tokyo, Japan’s largest city and the place most first-time visitors see. Ironically, despite our multiple visits, we’d hardly spent any time in Tokyo previously, so this was our first opportunity to become better acquainted with this world-class city.

The highlight of our Tokyo stay was meeting up with Urban Sketchers Japan for an afternoon of sketching in the Yanaka neighborhood and its historic cemetery. We followed up with more sketching over ice cream and tea, and eventually made an evening visit to Tokyo Tower and then an izakaya (pub style) dinner – all while sketching, of course! One of the very best things about being part of Urban Sketchers is being able to connect easily with other sketchers anywhere on the globe! My thanks to Kumi Matsukawa for organizing a fun day of sketching and eating, and to all the Tokyo sketchers for their warm welcome and USk camaraderie.

Ueno Park was a favorite Tokyo spot for both Greg (a photographer) and me. One reason is that the spacious park gave everyone plenty of space to play. Although we weren’t feeling particularly oppressed by Tokyo’s crowds, I imagine that the city’s residents use Ueno Park as a much-needed respite from the daily crush of people. Another reason is that I found buskers! While I didn’t generally see musicians or other performers on Tokyo’s sidewalks as I often do in Seattle, Ueno Park is obviously a popular place for them.

A castle on our must-see list was Himeji. On one gorgeous day that looked and felt like spring (the temperature in the afternoon got up to 70 F!), we made a day trip to Himeji-jo, which had been unveiled only recently after five years of restoration. In fact, on our last Japan visit, we had made a stop at Himeji only to discover it covered in tarps and scaffolding. It was fully worth the return trip to see the 800-year-old castle in all its splendor. Although I sketched it twice (the first time with a fine-point fountain pen), I prefer the second sketch shown here made with a brush pen that wouldn’t allow me to get into all the details. I think it conveys more of the joy and awe we felt that day viewing Himeji-jo’s beauty.

A major goal for this trip was to see (and, for me, to sketch) Mt. Fuji. We spent one night at Lake Kawaguchi at the foot of Fuji-san, hoping to see its elusive peak. It appeared only for a few minutes before ducking behind clouds again. Greg managed to photograph it a few times, but alas, I didn’t sketch it. (We were both soaking in a mineral bath at the time of its sighting!) I did, however, try to capture some of the hillside color.

The second leg of our trip was spent in Kyoto. Cosmopolitan while also retaining old-world charm, the former capital of Japan is one of few places in the country where you can still occasionally see women dressed in traditional kimono (either because that’s the way they dress or because they’ve rented an outfit for the day to enhance their selfie-snapping as they shop). In Kyoto, I had fun making my share of sketches of pagodas, shrines, temples and statues of the Buddha as I had expected to. But sometimes I need a reminder that while I’m always tempted to experience the “big” things when I travel, the smallest moments often turn out to be the most enjoyable.

Walking to the Kamo river a short distance from our rented townhouse, we discovered an oasis of solitude. Even on a warm weekend afternoon, the riverbank was nearly deserted – only a few strollers, bike riders and one or two residents reading or picnicking. The busiest residents were the many egrets and herons fishing in the shallow water. Filling several sketchbook pages with those birds, I decided that day on the river was my favorite in Kyoto.

Another example was when we had taken Kyoto’s well-known Philosopher’s Walk. A tree-lined footpath that takes about a half-hour to finish at a leisurely pace, it’s most popular in spring when all the cherry blossoms are in bloom, but November was also beautiful on the sunny afternoon that we were there. The icing on the cake was unexpectedly finding a busker on the path playing an unusual lute-like instrument. After several days of day-tripping and rushing through crowds, plunking myself down on a bench to sketch that busker seemed like the ideal, relaxing treat. 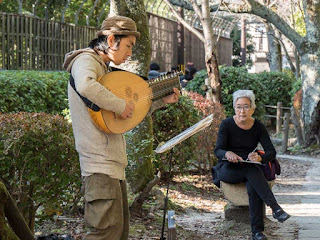 Our fourth visit since 2001, this trip brought different experiences than the first three, but it ended the same way: Whenever I leave Japan, it’s with a certain bittersweetness that I am leaving some part of myself behind. It’s not that I feel I belong there; as a Japanese American, the U.S. will always be my home. It’s not that the people there are “my tribe”; I actually have very little in common with Japanese culture and habits. It must be that my genes stir from recognition of all those people who vaguely resemble me. My roots don’t necessarily take hold in that foreign soil, yet they sense the ancestral familiarity that my consciousness can’t quite grasp.

As always, I left without understanding those feelings, but two things were clear: One is that I know I will continue to visit Japan, again and again, to reconnect with whatever part of myself I leave behind there. The other is that preserving Japan in my sketchbook enables me to stay in touch with that part long after I’m back in Seattle. Page after page, I still feel it – the home of my ancestors.

To read my full travelogue and view more sketches, please visit my personal blog or my Flickr album.
Posted by MiataGrrl