Note to self:  next year, do not go to the Fair on opening morning!  Not only was it opening morning, entry from 0900-noon was virtually free as long as one brought a donation of food.  Last time I sketched at the fair it was later in the run and it was raining.

With summer-like weather in the 80's, the place was mobbed!  I couldn't get near any of the small animals I'd hoped to sketch.  Additionally, there were hardly any rabbits as they don't come for another week.  I didn't know they scheduled animals!


After meeting the sketchers, I immediately navigated my way to the Draft Horse barn.  It was closed!   There was just a slit open in the door and it was enough for me to see a bit of the horses to sketch.  I sat my stool off center so I didn't block the door for other people wanting to get a peek.  These are Zach and Fritz. 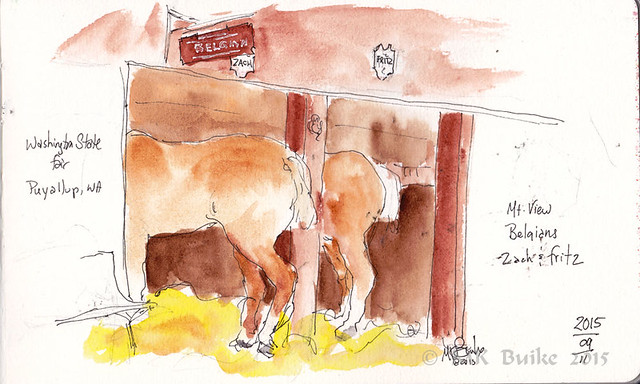 THEN!  Staff of the Mountain View Belgians   saw me sitting there and invited me in to sketch!  This made my day!   So I got a second sketch from inside the barn.  This is King being unharnessed after the parade. 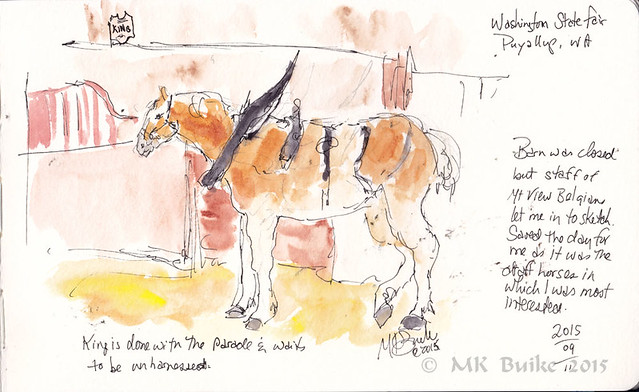 I wandered around but didn't find another scene I wanted to do.  I was somewhat distracted by the crowds.

We gathered to share our sketches.  In all, I think there were 10 sketchers.  Rom had to leave early.  Then we met 3 more Tacoma USk'ers at the gate as we were leaving.  They arrived late after being stuck in traffic.

Thanks to Gary for taking this photo!