Olympia: From the Legislative Building to Tarot Cards

For the 48th quarterly World Wide SketchCrawl, Urban Sketchers Seattle as well as sketchers from Marysville to Bainbridge Island gathered at the steps of the Legislative Building in Olympia for a day of sketching. The morning was cloudy and 60 degrees – the world’s best outdoor sketching weather, if you ask me!

I have been wanting to sketch the Capitol building for a long time, so my first mission was to walk across the boulevard to the top steps of the Temple of Justice building and face the Capitol squarely. The sun stayed behind clouds most of the morning, which was great for sitting outdoors, but I was hoping for a peek of sunshine to help me with shadows. At 11 a.m. when the building opened to the public, I could hear the “Star Spangled Banner” playing somewhere. The flags were at half-staff for the five military service members who were killed Sunday in Chattanooga.

Since that sketch took more than an hour, I spent most of the remaining time before the sketchbook sharing wandering around to see the beautiful Capitol campus that I rarely see. I made a mental list of a number of things I’d like to sketch the next time I visit. I did squeeze in a quick detail sketch of one of the lamp posts in front of the capitol.

Next on the itinerary was to meet up again at the nearby Olympia Farmers Market, which is a smaller and cozier version of Pike Place Market, but just as colorful and fun. That’s where I got my people-sketching fix. During lunch, the jazz band Tra-La-Lu performed on the main stage, which is an actual stage – no casual buskers, these guys! I regret that their set ended before I could sketch the trumpeter.

Interestingly, I found both a palm reader and a tarot card reader working this market, and both seemed to have a continual stream of clients as I sketched them. If there’s a connection to be made between our state governance and the need for psychic services, I’ll let you make it. 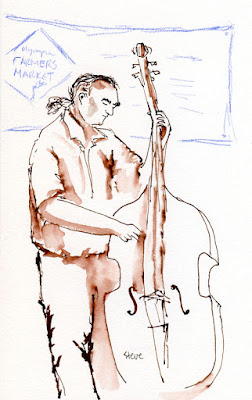