On the last sunny day of summer 2013, I went to meet with a WSU interior design studio that was visiting Seattle at the Seattle Science Center. Various sketchers shared our notebooks and stories with the students before braking up to go sketching around the Science Center.
I had not eaten breakfast and went in search of somewhere to eat outside of the packed Armory food court. I eventually found my way to the Cherry Street Coffeehouse on Fifth Avenue, which offered bagels, coffee and red leather armchairs. 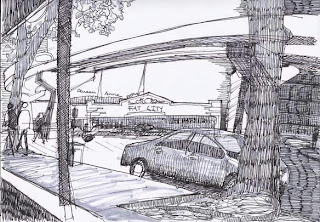 I particularly liked the painting on the German car repair shop across the street from the coffeehouse. Besides their fanciful lettering, the building was also covered in murals depicting various scenes from automotive history: a gas station in the 1930s, mechanics working on vintage 1950s cars, and logos from various German car companies. 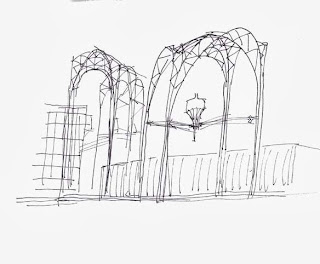 On my way back to the Armory, I stopped to sketch the Science Center exhibit hall towers. I was particularly challenged by the grid work within the towers. 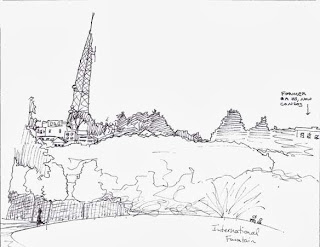 I also stopped to sketch Queen Anne over the International Fountain. This seemed appropriate as I had been sketching on Queen Anne the weekend before. I had planned to capture all three TV towers, but did not constrain my proportions enough.
Posted by Logan