Almost a year since our last outing there, it was great to be back at the Pike Place Market with USk Seattle on Friday. Last year, still in my post-vax frenzy of wanting to sketch people again, I spent the whole outing sketching nothing but. This time I had a different goal: I wanted to make sure I had nailed the concepts I had learned from Gabi Campanario at Gas Works Park.

As a warm-up, I made a thumbnail of Post Alley, where the angles of awnings and rooftops came together in an interesting pattern (at left). Then I made my way north to Market Commons, the newest addition to the Pike Place Market. Looking out toward the waterfront, I was amazed by all the construction that was still going on where the Alaskan Way Viaduct used to be. I thought more progress would have been made since I last saw it a year ago. No problem, though – I found an excavator busily moving dirt from one pile to another (below).

It was time to get down to business. Pivoting 180 degrees from where I had made the excavator sketch, I looked up at the Market Commons building, which is full of eateries and shops. I could see its entire span from Old Stove Brewing’s tanks (on the right) to the edge of Steinbrueck Park (the umbrella at far left). Behind it were skyscrapers and apartment buildings. In the foreground were tables, foliage and fencing that kept pedestrians from falling down into the construction zone. It’s exactly the kind of compositional scope that I find compelling but that I would typically avoid. Using the scaling and measuring tips Gabi had given us, I quickly blocked in the extremes of everything I wanted to fit onto the page spread. Most of an hour-plus was spent drawing the complicated Commons building (I should have simplified it even more). Whew! I fit it all in (top of post)!

Although I still had a half-hour before the throwdown, I was too famished from the ambitious sketching workout to make another. I got a delicious snack from Honest Biscuit and stuffed my face with it as I walked to the throwdown at Steinbrueck Park. I had a terrific morning at the Market on a beautiful day! 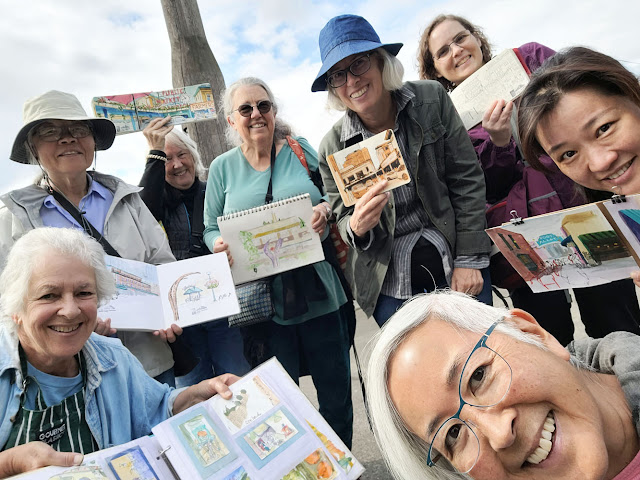 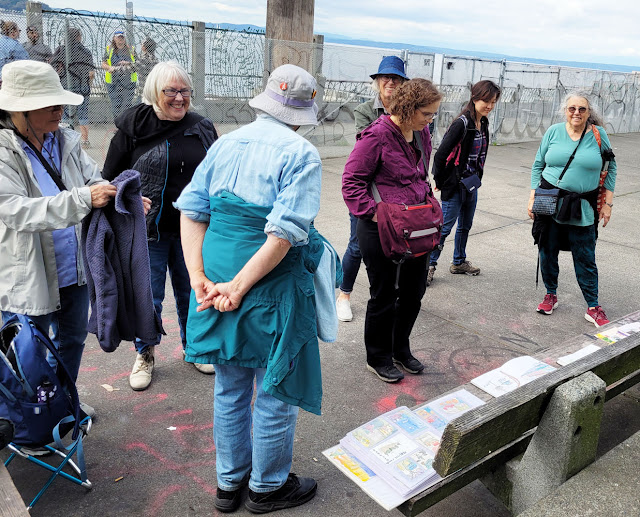 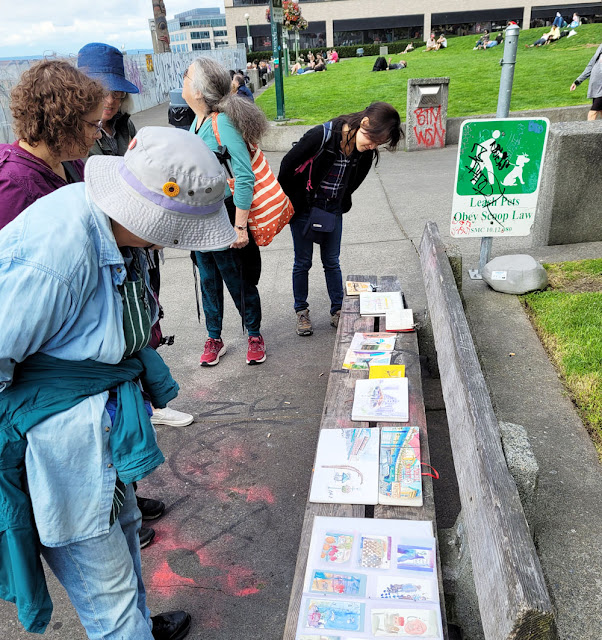