Back to Green Lake

Despite yesterday's uncomfortable air quality due to wild fire smoke, Urban Sketchers Seattle met in the Green Lake neighborhood this morning.  The air quality was better and we had a large turnout.

This is a very popular area due to the large park and lake.  It's quite far from where I live so this is only the second time I've sketched there. We met at PCC market so I walked down to the park.  On the way I saw a restaurant building I remembered from the previous visit and one I'd wanted to sketch. 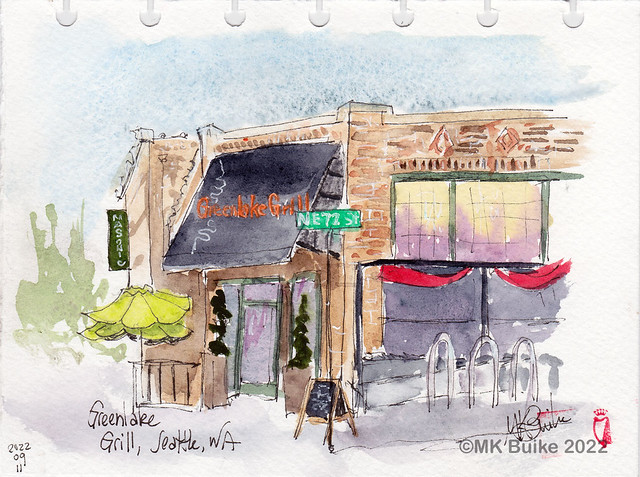 From where I sat while sketching the building, I could see an arch in the distance, inside the park.  So I made my way to it and there were already some sketchers there. 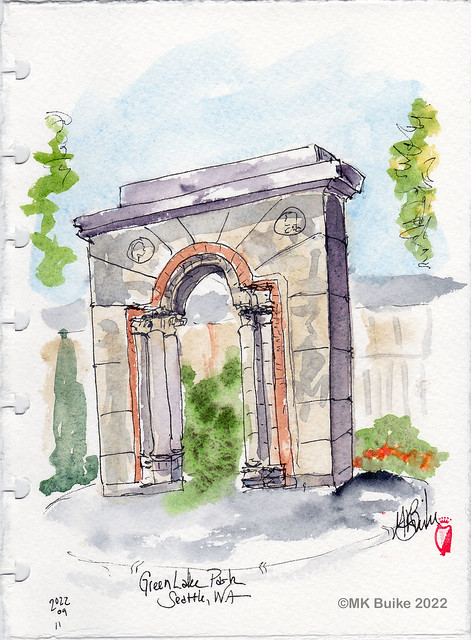 From plaque on the arch:  "These terra cotta archway pieces originally graced the front entrance to the Martha Washington School Administration Building...The school buildings, located in southeast Seattle, were demolished and the site is now Martha Washington Park...The pieces...serve as the focal point to the Green Lake Shade Plaza."

I found more information on line:  "This impressive classical piece of architecture was in fact once part of the Martha Washington School for Girls. Built in 1921, the school was located on the shores of Lake Washington and consisted of Georgian-style brick buildings designed by architect Floyd Naramore. The school was operated by the Seattle School District and was intended to aid neglected and unfortunate young girls. It eventually closed in 1957."

We met back at PCC for the throw down (sharing sketches).  Several people had already left by the time we took the usual group photo.