In November 2017, I returned from a two-week Rajasthan trip happy, grinning ear to ear and with two sketchbooks brimming cover to cover. I was so productive with my sketching that it only took me the four days I spent in the frontier town of Jaisalmer, amidst the majestic twelfth-century World Heritage fort, to fill my second sketchbook.

Sonar Killa – the Golden Fort – is set in the Thar desert in northwestern India, less than two-hundred miles from the India-Pakistan international border.  The glitter of the yellow sandstone walls in the early morning sun is dull and metallic, reminiscent of the precious metal that the fort is named after. It is as much a breathtaking sight today for a modern traveler as it must have been to a merchant plying the silk route when the Mughals ruled India in the fifteenth century. 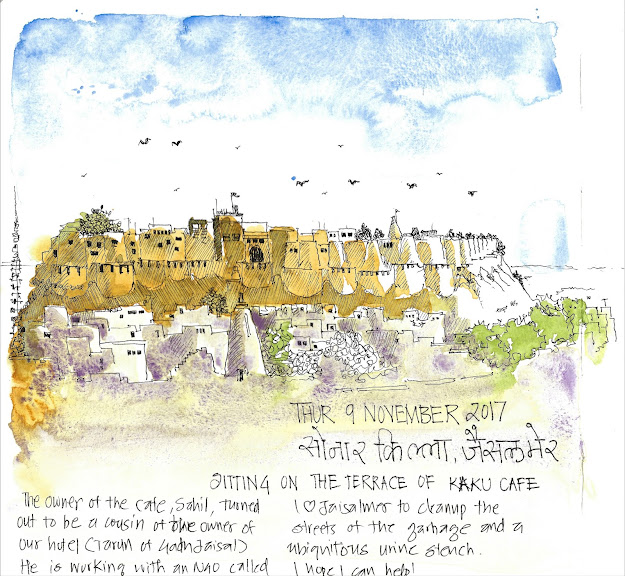 We had found ourselves a room with a jharokha – an overhanging enclosed balcony situated on top of the bulwarks, with a sweeping view of the surrounding town and the landscape. A young scion of the family that has owned the eight-hundred-year-old haveli – a traditional Indian mansion – for several generations was responsible for its conversion to a tastefully decorated boutique hotel. Many such families still own apartments and mansions on the fort, passed as an inheritance from generation to generation. The fort has been continuously lived-in since olden times, the narrow streets buzzing with the sounds and smell of day-to-day life, adding lively charm to the ancient walls. 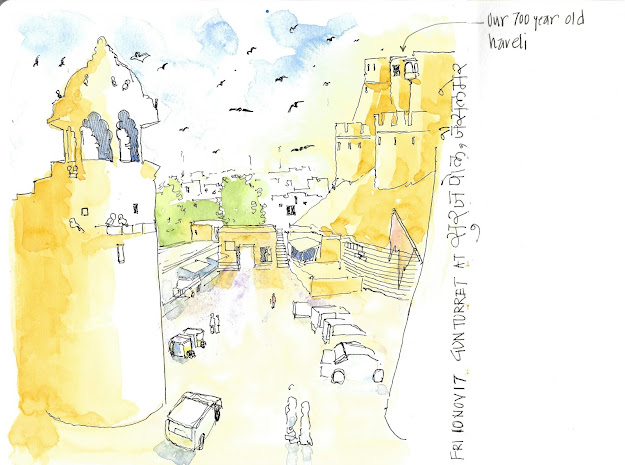 I took every opportunity I could find to slip out of our room and situate me in one of the many nooks and crannies of the fort to sketch. One such early morning sojourn led to the discovery of a portal hidden behind a carpet-sellers display. The opening led me along a narrow ledge behind a succession of gun-turrets, to a gun-slot where I squeezed beneath the barrel of a tremendous gun, one that had stood poised to protect the fort for many centuries. 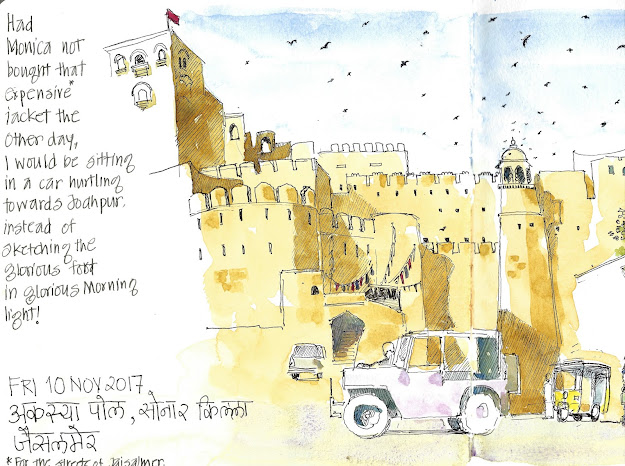 In Nov 2017, I was deep into the preparation of my Middle East adventure to travel in the footsteps of probably the original urban sketcher of them all. The Scottish artist David Roberts had traveled through Egypt and the Holy Land in 1838-39, to sketch through direct observation, the landscape mentioned in the Bible, the first time such an ambitious project was being undertaken. Looking back at my sketches of Jaisalmer, I notice I had already started experimenting with David Roberts’ inimitable style – juxtaposing locals in colorful garb against monumental architecture. Fortunately, psychedelic colors and majestic architecture are both to be found in abundance in Rajasthan. 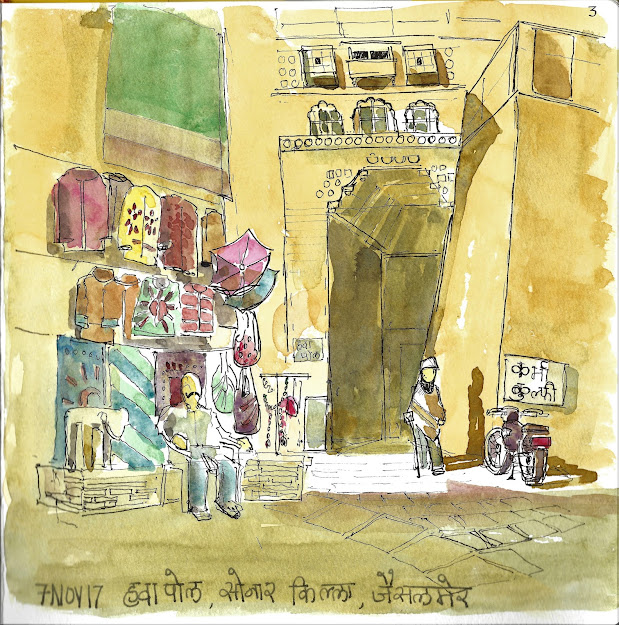 My wife Monica and I bivouacked on the sand dunes of Thar under a star-studded sky. Our guide, a local villager with mustache thicker than my thumb, had cooked a hardy meal for us over ambers plucked from the roaring campfire. After serving us the piping hot daal-baati – crisp wheat balls baked and then mixed with spicy lentils, doused with dollops of ghee, the guide used an empty five-gallon plastic water jug as a banjo to provide beats to the folk songs he sang for us. On our way back, our jeep got stuck in the sand. Leaving the driver to wrestle with it, Monica and I hiked a dune to arrive at an ancient cemetery with the fort gleaming on the horizon. 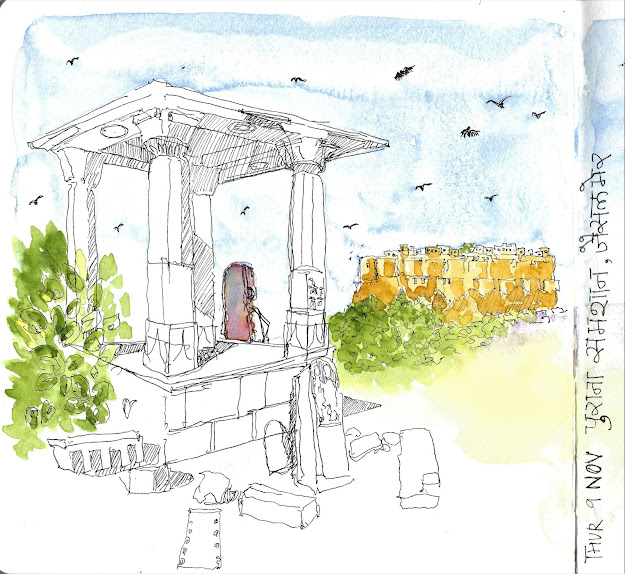 My goal for the trip was plenty of line-and-wash - “wash where there are no lines and lines where no wash is needed”.  As I sat down for sketching, I found myself drawn to the strong architectural lines and the squiggly curves of the Devanagari script (and Rajput mustaches.)  I felt like I had barely scratched the surface of Jaisalmer in the four days I was there. It is only a matter of time, I am sure before I go back to Jaisalmer, which I already consider in my favorite top 5 walled cities of the world. 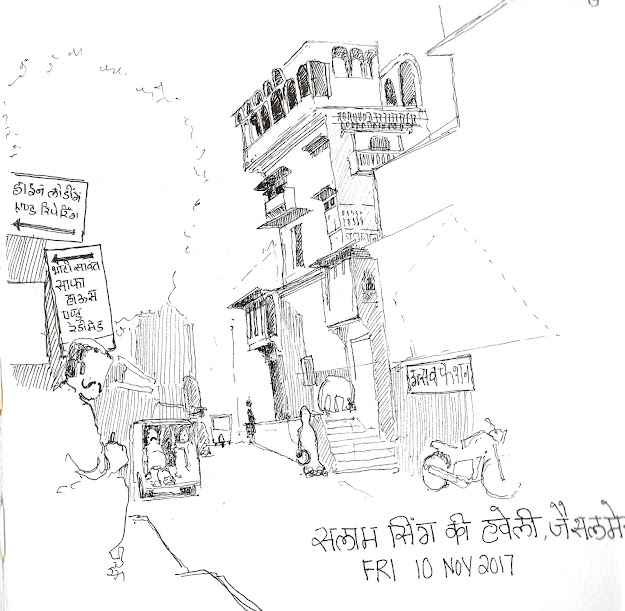 Sunil Shinde lives in Seattle with his wife, two daughters, and his golden retriever, Oscar. He has been an ardent urban sketcher since 2013. When he is not traveling, he is building an AI-based population health product in stealth mode. You can see his sketches here.