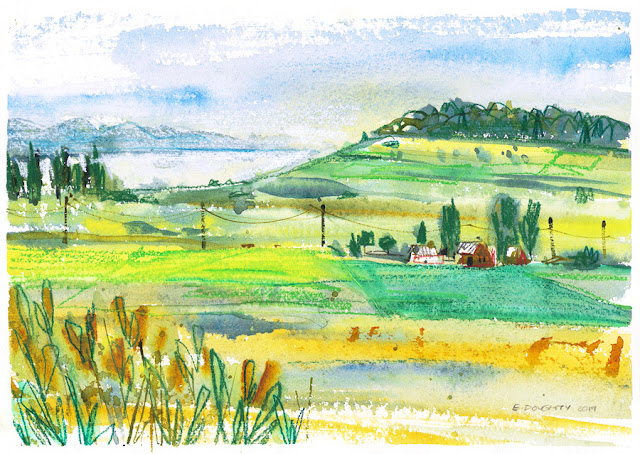 I had a really sweet opportunity to go to Whidbey Island recently (my first time out here!). I was hired by a Seattleite who wanted someone to document her classy bachelorette party at this amazing house on open prairie land near Coupeville. I jumped on my 180cc scooter at 7 am and rode up to the Mulkiteo ferry through the rain. Luckily the weather was much clearer on Whidbey. This was by far the longest distance I've gone by myself on the scooter so far. 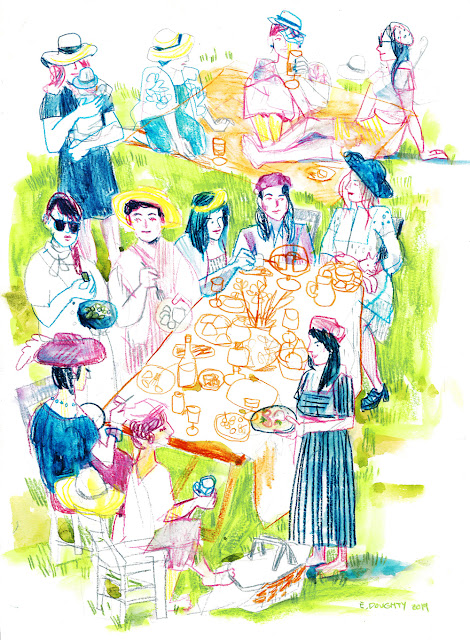 First thing I had to do was to document the picnic. All 12 of the ladies had dressed up in 1920s-esque clothing and even rented period hats from a costumer. People were coming and going, so I had to improvise this one. I started by drawing the table and placing a few people near the bottom of the page (the front) and working towards the back of the page more or less. Somehow I fit everyone in!

After this, I had to sketch all 12 of the women on their own in 10 minute poses. Since it's not technically urban sketch I won't post them here. But it was fun to chat with everyone one on one!
I would love if more people hired me to do live gigs like this one. There's so much potential for wedding sketching documentation - as we know, drawing can capture so much that cameras can't.

At this point it was kind of late and I was thinking about the long distance I had to go home. But the host invited me to stay the night and I had gotten really good vibes from everyone, so I decided to take her up on it and crash on the couch. This allowed me to go out to Ebey's Landing with the party, a place I've wanted to see for a while. 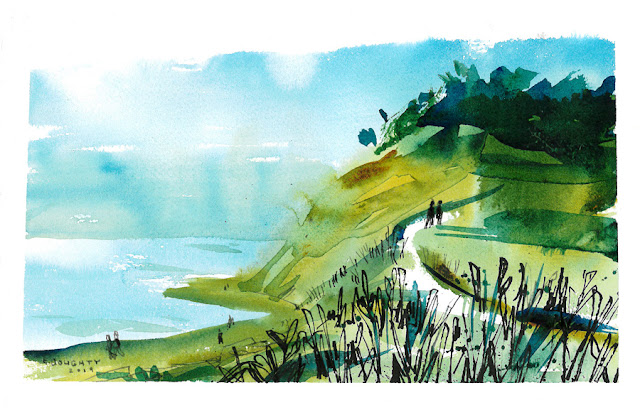 A simple watercolor sketch of the ridge trail above the recognizable 45˙ slope. I chose to paint instead of hike...was it the right choice? idk.

I was feeling socially exhausted so I went back to the house while the party went out to dinner in town. I sketched another view from the house at sunset and painted it in with a limited palette of sap green/orange/quin rose.

I left early the next morning to catch an early ferry to Port Townsend, another place I've heard great things about but hadn't made it out to see (owning that scooter has really opened up my world). Well it did not disappoint! So much great architecture. Alas I had to be back in the city by the afternoon so I couldn't explore as much as I wanted to, but I managed one ~1 hr sketch of the main street by the water. A busker was playing nearby, it was a beautiful morning. 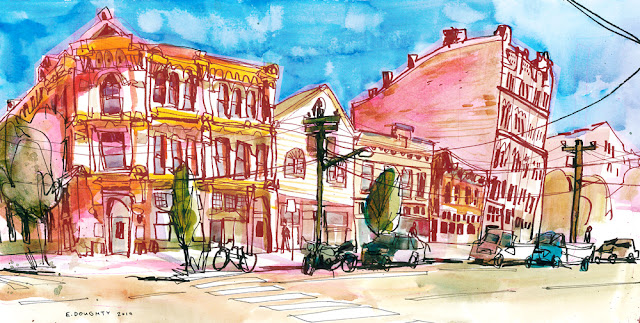