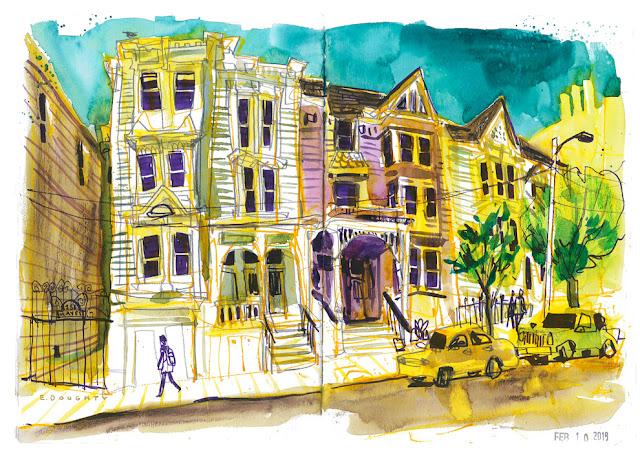 San Francisco is really one of the most beautiful cities anywhere. Definitely not without its flaws, but the combination of the architecture, steep hills, natural surroundings, and that golden California light is heavenly. I could probably paint there forever. One of my good friends lives in SF now, which gives me a good reason to visit, but honestly I'd be living there now...if only I could afford it. that income inequality tho 😩 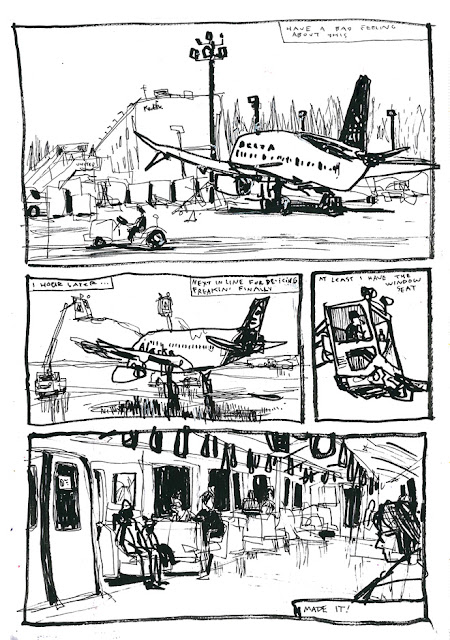 I barely made it out of SeaTac. Snowmageddon began as I was waiting at the security checkpoint, and then we sat on the runway for a couple hours waiting to be de-iced. Passengers around me were starting to lose it, but I had a window seat and a sketchbook, and I tricked myself into being less impatient by sketching the view out the window — instead of being desperate for the plane to move, I was appreciative of the fixed viewpoint. Apparently we were the last SEA plane allowed into SF's airport that afternoon. Blessed! 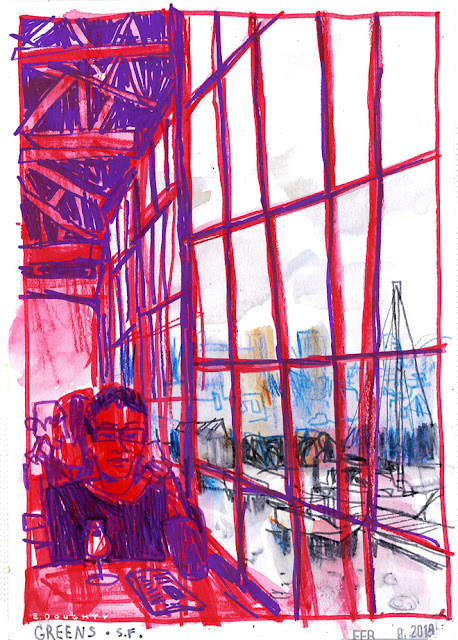 First full day in the city! It was supposed to rain the whole weekend, but when we woke up it was sunny. I bolted upright from bed, threw on some clothes, and went out on the town to make the most of the small window of not-rain with my friend Lauren. We went to this great brunch spot called Greens, in an old warehouse/former Navy area on the water. The views of the marina are pretty great from here, seen through a whole wall made of windows. The food was also excellent! 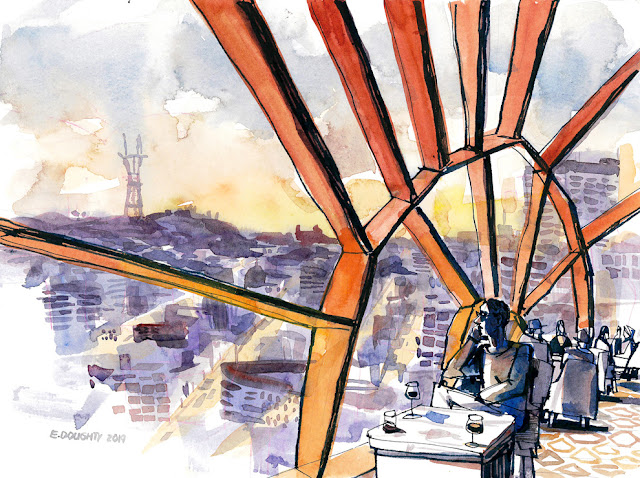 Lauren knows the best spots, one reason I love to visit her. We split the most expensive bottle of wine I've ever purchased (thanks S.F.) and watched the sun set over the hills from this sky bar called The View on the top of the Marriott downtown. Another place with really striking windows. Though once the sun set, there was very minimal lighting so I couldn't see what I was painting, and of course the light is constantly changing at this time of day, not to mention the weather - sunny one minute, raining the next, and on. 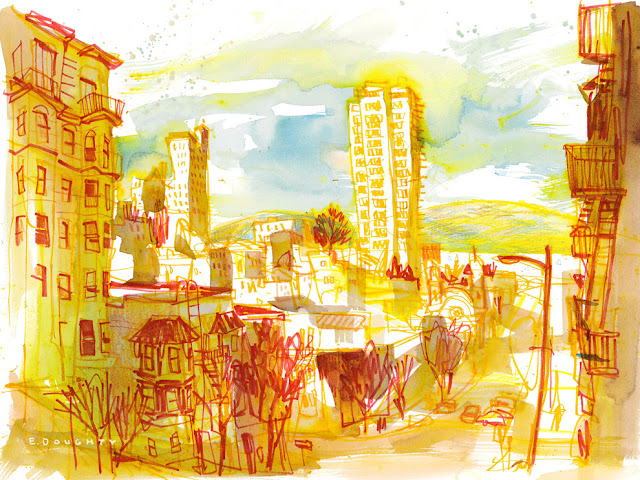 Next day, I did a solo sketchwalk for a couple hours around one of my favorite neighborhoods in SF, Nob Hill. It's extra steep, just how I like it. I didn't have much time here, so on this sketch I went straight to ink – using up some colored water soluble ink cartridges (the kind that are made for the parallel pens) instead of my usual permanent Carbon Black or rapidograph inks. Trying to play with the soft/hardness you get when applying water selectively, but it's sad when you really like that underdrawing and it just melts away...

I want to capture the golden light I see in California (and to a lesser extent in Seattle too) but it's truly elusive. I can't really explain it, but I could point it out to you when it's there. Do you know what I mean? There is definitely a difference between the west coast light and the east coast light, especially later in the days when it's clear out. 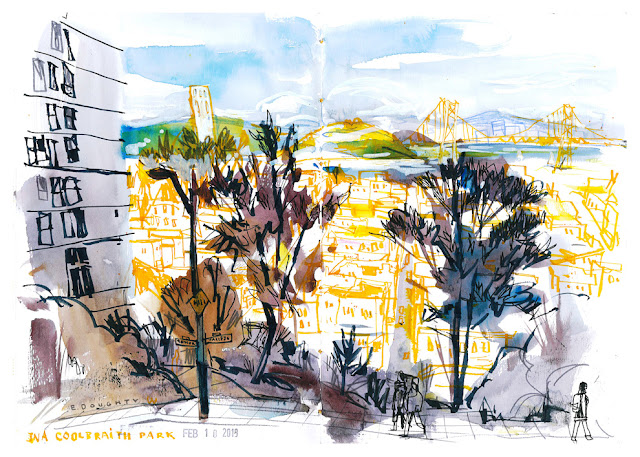 Ina Coolbrith Park: a place I'm intimately familiar with, yet never set foot in until last week. I was commissioned to illustrate the view from here last year, a project I remember being super frustrating despite the appealing subject matter; I spent (too many) hours staring at photos and street view here. It's quite a strange feeling to know a place so well but without having been there. Anyway, it's a wonderful viewpoint – this is only a fraction of what you can see from this small hillside park!
Posted by Eleanor Doughty