A couple of weeks ago Roy DeLeon, Gabi Campanario and Dave Morris made a 360-degree collaborative sketch, with each taking 120 degrees of a café view. As soon as I saw Roy’s post in the USk Seattle Facebook group, I wanted to take part in a 360, too! I talked Sue Heston, Kathleen Keckler and Ellie Doughty into doing it with me at the Seattle Central Library, where USk Seattle met today for our last outing of the year.

After exploring the library for a while to find an appropriate view, the four of us settled on the third floor’s “Living Room” space, which has lots of open seating, including an ideal quadrant of chairs for us. We each took a 90-degree view of the large space surrounded by the iconic diamond-gridded windows of the Koolhaas/Prince-Ramus-designed building. Well, surrounded except on the 90 degrees that I took, which was both a blessing and a curse. I remember how daunting those windows were when I attempted them several years ago, so missing them was a blessing. On the other hand, the view I got was mostly a boring concrete wall and a couple of bookshelves that presented a significant perspective challenge. Curses! Whose big idea was this, anyway!

Once I got started, though, the challenge became fun, and lining up the four sketches in sequence at the throwdown made it all the more fun. I’d like to try it again sometime! 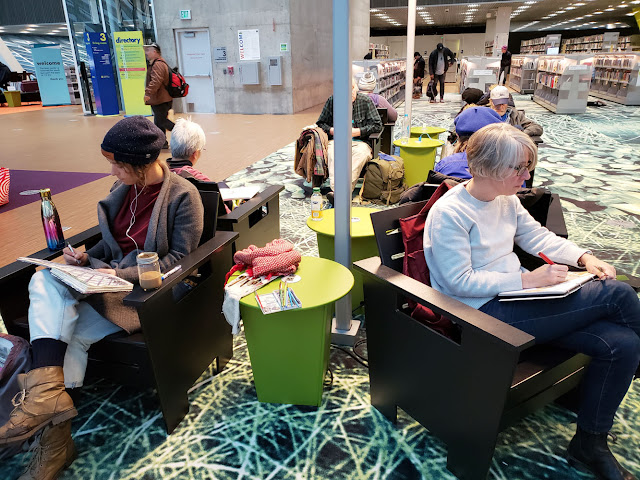