Green Man Bun and Other Excitement at SoDo Reserve

Although our outings are always fun and exciting in an urban sketching sort of way, none of us expected the kind of excitement we had this morning at the Starbucks Reserve SoDo store and café. I had arrived a few minutes early, so I was still in my car when hundreds of people suddenly started pouring out of the buildings and onto the parking lot. I was afraid we had chosen to sketch there on the same day as a major convention!

I soon learned that a fire drill was taking place at Starbucks headquarters. Waiting outside in the wind and rain, a few other sketchers and I watched as the fire marshal attempted to keep people from entering, sometimes ineffectively. We decided that his bright green man bun added nothing to his authority.

Eventually we were allowed to enter, and I was grateful that the only fire was the one burning in the cozy fireplace in the center of the store.

The first time I sketched at the SoDo Reserve last March shortly after it had opened, a bright red slicing machine had caught my eye, but I couldn’t find a clear view of it then. This time I shared a table with Kathleen, which gave me reasonably good view (except for the continual stream of customers at the counter that I had to dodge). My intention was to simply make a ballpoint InkTober sketch of the retro-looking machine, but I ended up being fascinated by its mechanical workings as a deli worker sliced ham for the sandwiches she was making. 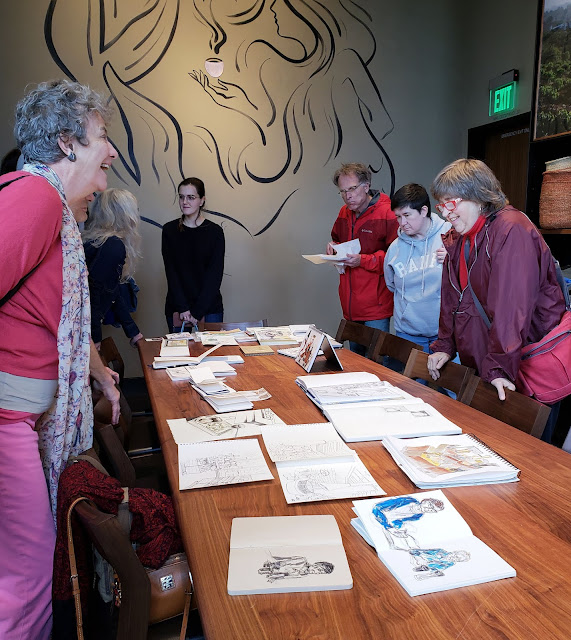 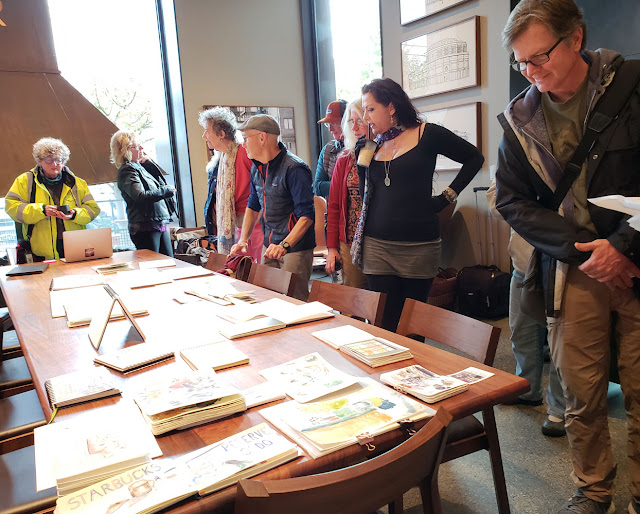