One thing I like about Urban Sketchers outings is that they take you to new places. This past weekend, I got a chance to experience the 'spiritual' side of Greenwood.

First stop in the itinerary is the Sakya Monestary, a Tibetan Buddhist temple set in the middle of residential area. Several things caught my attention right away: the bright colored exterior, the bell-shaped stupa (chorten) with the prayer wheels, and the snow lion statues, among other things. I whipped out my iPad with procreate app for this one. The lion statue was drawn using a continuous line drawing method. The stupa is such a prominent feature that I drew it twice. I sketch all linework on site then add the colors later on.

I walked a couple of blocks to the next stop, St. John The Evangelist Catholic Church. This time, it's analog time with my trusted papermate marker and moleskine sketchbook. I applied the same method that I use to sketch interior spaces – I reduced the scene into basic shapes without worrying too much about the correct perspective. It turned out to be more challenging than I thought; I miscalculated the height of the tower, and got caught up in detailing the brick texture. In the end, I decided to go back to the basic and not stressing out about the little mistakes. After all, urban sketching is all about 'capturing the essence of space'. In the end, it turned out to be a pretty productive sketch outing. 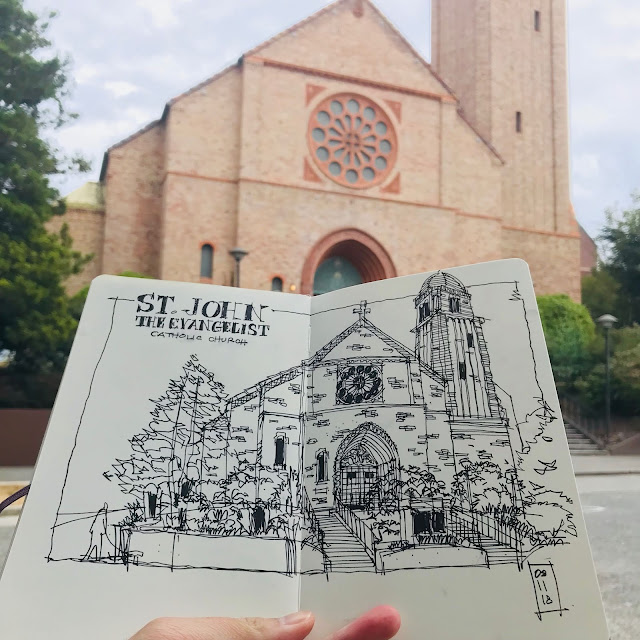