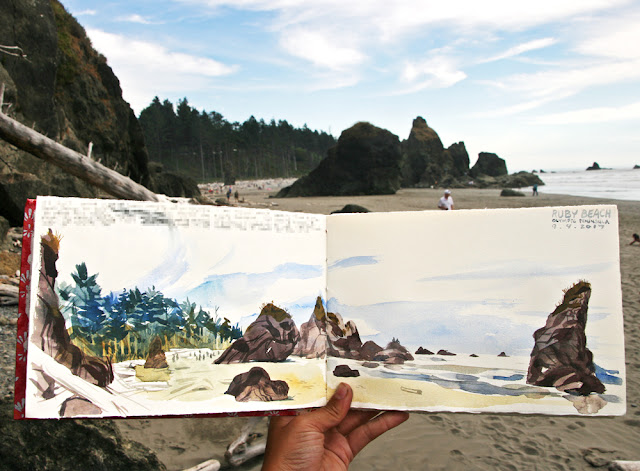 I'm Eleanor (or Ellie) - nice to meet you! I'm a new Seattle transplant as of September 2017. I moved here from NYC (Brooklyn, Bushwick) for a few reasons, none of which have to do with working for Amazon/Microsoft/etc:


• I was super tired of having multiple roommates, but wasn't willing to pay twice as much rent to avoid it. Also my lease was up, and it's so horrible to move in NYC it was pretty much just as difficult to move across the country as to move across a borough.
• Having grown up exclusively on the east coast, it was time for a change!
• The west coast was the closest thing to moving to a different country before it would be logistically super difficult. I plan to stay here for a few years before moving overseas.
• I wanted to live in a place where you could see mountains. The Pacific Northwest delivers.
• The light on the west coast is different. golden. magical (when the sun is out).

I grew up in northern Virginia, just outside of Washington D.C., earned a BFA in illustration at Virginia Commonwealth University in Richmond, VA, and then moved up to Brooklyn for three years. There I co-founded the Brunch Club Sketchers group, which has a similar mission to USK. After the Chicago Symposium, I wanted to get more involved with the global Urban Sketchers community, and here we are!

I currently work as a freelance illustrator (editorials, architecture, private commissions, etc.) and hustle selling prints online & in craft markets around the city. My sketching style is pretty bold and energetic, influenced by my work as an editorial illustrator, where it's critical to use shapes to create striking, attention grabbing images that also communicate clearly. I got really into watercolors last year but drawing is my first love! I especially like sketching scenery from above or from afar, to see the true character of a landscape. The mood I usually try to evoke is lighthearted & a bit wonky and off-balance.

Although I sketch on the daily, I'm looking forward to this opportunity to write more & provide context to the things I draw. I realized that the drawing part is only half the battle in urban sketching – so now I want to work on my journalism skills. So far in Seattle, sketching has brought me many opportunities to explore the city and meet interesting people, as well as a good excuse to get outside and take advantage of nice weather when it happens.

Here's a flipthrough of my sketchbook from the first four months of my Seattle life (Sept. - December 2017), and some highlights below: