For Seattle, the weather was frightful.  We decided to delay the start of our sketch outing, matching the plans of the Seattle school system in a 2 hour delay.  Three of us arrived about 11am and sketched around Swanson's Nursery.  It was very cheerily decorated for the holiday season.

Santa had been moved to a yurt, so sketching him was rather too cramped.  The two reindeer were there but Curly, the Camel, was off sick for the season.  There was a note that he had a sore leg but was doing fine.

The roads were clear and wet, so getting there wasn't a problem.  As I neared the nursery, I noticed there was quite a bit more snow in that north Seattle neighborhood then there had been in my own suburb some 30 minutes south of Seattle proper!

There was enough snow that the staff had made a tiny snowman to add to one of the displays!  I had to touch him to realize he really was made of snow.   He had raisins for eyes and a tiny bit of carrot for a nose. 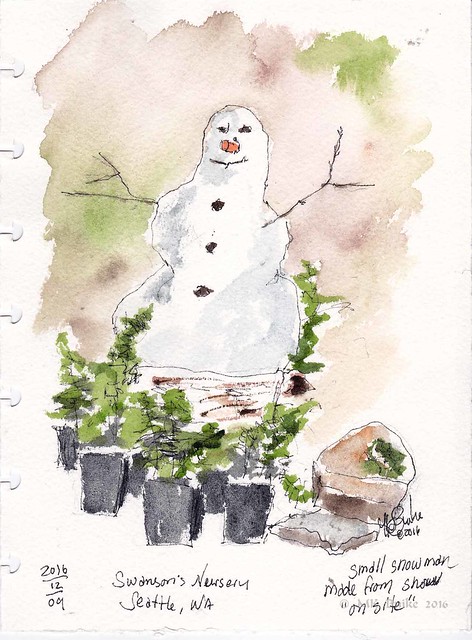 We met at noon.  The 3 of us who had come early shared sketches and had took a selfie.  Three more arrived to meet us for lunch and to sketch afterwards. 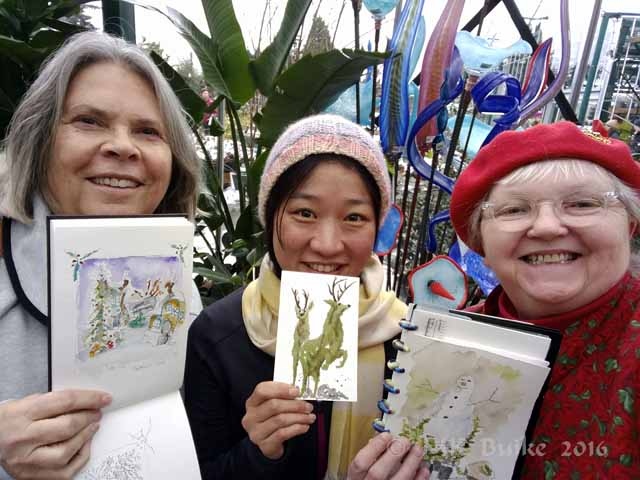 The early and hardy sketchers: Vivian, Ching and me