Goats Instead of Deer and Camel

Swansons Nursery has been a favorite location for the Friday sketchers for several years now. A mainstay during the holidays when it brings in reindeer, camel and Santa, Swansons was also fun last spring. Now we have a new season to add to our Swansons lineup: Halloween! Decked out in plenty of pumpkins and fall décor, the north Seattle plant nursery also has adorable Nigerian dwarf goats and a hay maze.

At the beginning of the meetup, I went over to the goat pen first and had it nearly to myself. I took advantage of the relative quiet to do several studies of Tootsie Roll, Buttermilk Pancakes and tiny Mega Man.

Eventually the toddler set took over, so I moved out to Swansons’ main outdoor retail area. Sunshine broke through the overcast sky, and it was warm enough to eventually take my jacket off as I sketched the dinosaur topiary and surrounding greenery. (When we go back in December, I’m guessing we won’t be as lucky, weather-wise.)

When I went into the café for a break, a toddler at the next table caught my eye. If I thought the constantly moving dwarf goats were a challenge to sketch, they couldn’t hold a candle to this little guy, who gave me about 5 seconds to catch this pose. 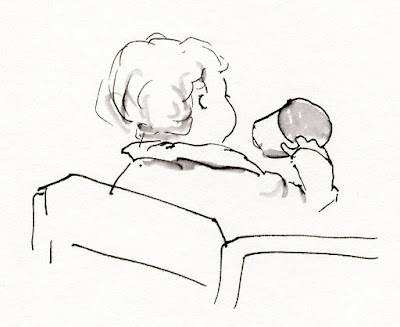