Unlike so many Seattle neighborhoods, Beacon Hill hasn’t changed much since I hung out there as a teenager (I didn’t live there, but many of my friends did). The biggest change was the opening of the Link Light Rail Station in 2009, which now brings a lot more foot traffic to the ‘hood.

Knowing that, I was a bit surprised this morning that the immediate area around the station didn’t have more coffee shops and cafés for chilly Seattle Urban Sketchers to retreat to when the day starts out too cold for comfort. At least that was my thought after I did a very quick “test sketch” of a station sign post to see if I could stand being outdoors all morning.

I couldn’t, so I crowded my way into The Station coffee shop, which Michele had told us about. With great funky street cred, The Station is tiny but makes a mean Mexican mocha that definitely took the chill off. After sketching Natalie’s bacon-wrapped biscuit and sampling Gloria’s cinnamon roll, I was sufficiently warmed and fortified to head outdoors again. Just outside the door was the shop’s pug, which kept my pen moving.

The sun came out, so I gladly took a short walk to check out the ‘hood with Anne and John, who pointed out the Seattle Public Library’s Beacon Hill branch. The modern building is topped by The Dream Ship, a sculpture by Miles Pepper that appears to be part boat, part plane. After the challenge of the constantly moving pug, I thought I’d give myself a break by sketching a nice, stationery object. No sooner did I put pen to paper, however, did I realize that the sculpture is actually kinetic, rotating with the wind!

Afterwards at the Baja Bistro, I started sketching Ching and Marvin (who was sketching me and not as surreptitiously as he thought he was) and would have kept going around the table. Fortunately for the others, my burrito came, so that sketch was done. 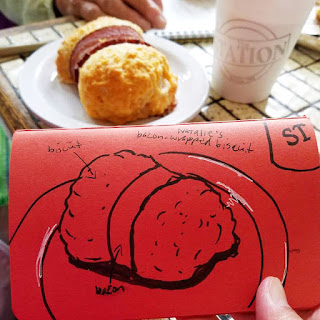