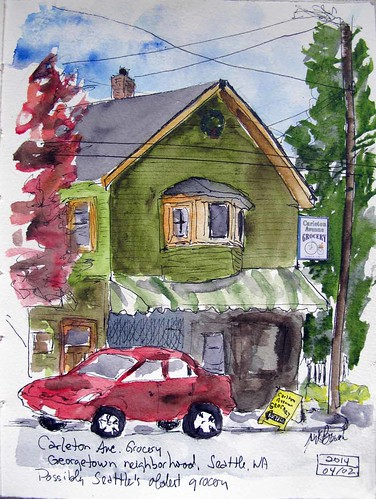 The Carleton Ave Grocery Store is one of the oldest in Seattle and one of only a few neighborhood corner stores left.   I've been by several times and it seems to be a neighborhood hub.  People stop by for a chat and sit outside on the bench when the weather is nice.  It is far more than a convenience store as it stocks nutritious food and fresh vegetables.
When the Urban Sketchers flickr group announced the weekly theme of  "The most ___ house in your neighborhood" I thought I'd go over to sketch it as I've been meaning to for about a year.  My neighborhood is boringly monoculture and bland, so I have to go somewhere else for interesting houses.
Posted by MK Buike