I have a hard time distinguishing between sketching and plein air painting so I hope it's okay to post examples of each. I did a couple of watercolor and pen sketches, with a little casein thrown in. And I did a few oil paintings on location. Each took about two and a half hours. One of the paintings turned out to be a demonstration of how oil and water don't mix. 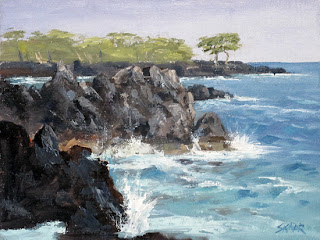 I set up my easel on the cliffs below the Lekeleke Burial Grounds, south of Keauhou Bay, to do a painting of  the black lava shoreline. There are narrow slots in the cliffs, probably from collapsed lava tubes, and the waves that funnel into them get concentrated and occasionally burst out with spectacular spray, similar to the blow-holes that are found along the coast. As I painted, the slot next to me would periodically erupt with a boom followed by a brief silence, then the hiss of spray as it rained down on the rocks about 20 or 30 feet to my left.

After an  hour or so I got accustomed to the sound of the surf and feel of the light mist. At one point I noticed a couple of waves rolling in, much bigger than the ones I'd seen coming in for the past hour. I grabbed my easel to make a run for it  just as the first wave entered the slot, and before I could take two steps I heard, and felt through the ground, the huge WHUMP as the wave hit the cliff. Spray, along with part of the wave, launched 30 feet or more above the top of the cliff. What came down was not mist but a slap of salt water that drenched me and filled my easel, paint box and my pack with part of the Pacific.

I shook the water off my camera and dried it with some paper towels from a pocket in my pack. Then I poured the water out of my paint box, easel, and pack. Fortunately oil paint and water don't mix so I continued to paint, pushing beads of water out of the way with my brush as I worked. 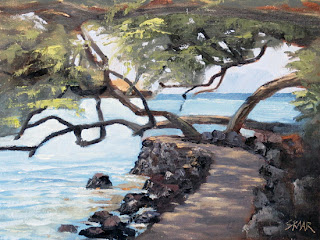 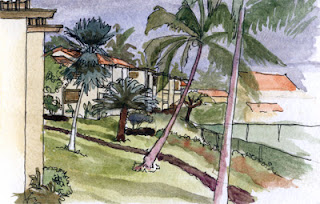 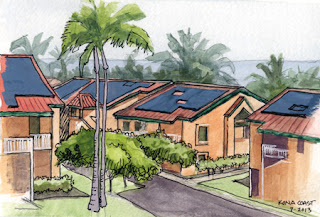