Walla Walla called this weekend with a family commitment, but it didn't keep me from participating in the International Sketchcrawl. I spent most of Saturday afternoon on Main Street sketching several scenes. These are the ones I had time to complete. I'm sad to have missed the Portland crew and the International District, one of my favorite locations.

I copied the plaque on the Day Reynolds Building. Apparently it was the site of the first constitutional convention of Washington Territory in 1878, ten years before we became a state. It now houses Falkenberg's Jewelers store. 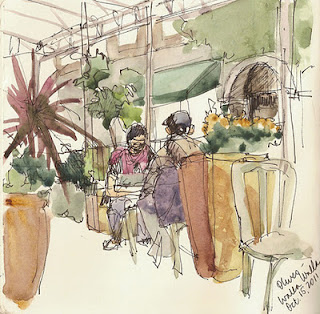