Happenstance and The Sons of Norway; "Gud Signe Norigs Land" In Ballard 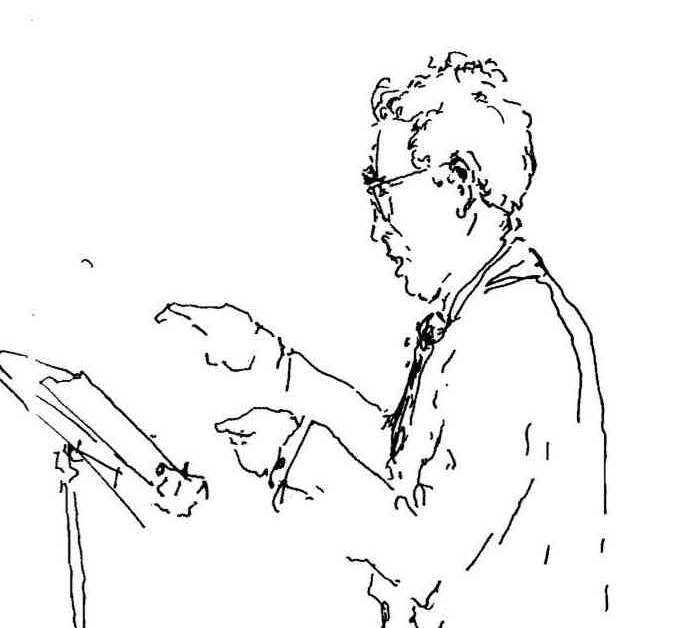 Quite by accident, saturday morning I came across a bunch of joggers with Norwegian flags.  The last time I saw so many crosses on the move was in a biathlon, so I was naturally intrigued.  After I was finished with a meeting in Ballard, I decided to follow the joggers.  They funneled into a function hall aptly named the Leif Erikson Hall, which happens to be not only the meeting house for the fraternal group Sons of Norway, but also the location for Ballard's annual Norwegian Festival.  I ate some Karbonade and mulled around the hall which according to the program would be a dance floor soon enough.  Between raffle prizes of Codfish and nordic unpronounceables, I drew Bob Johnson conduct his Norwegian Male Chorus to belt a rendition of Gud Signe Norigs Land.
After the choir finished I approached Mr. Johnson and he assured me that this song is second only to the national anthem in its patriotism.   I like this drawing because it pivots around the depicted face: ever so often during the song, Mr. Johnson would check his music, allowing me to draw with some accuracy.  In the sketch, as you travel farther from his concentrating and communicating head, Mr. Johnson's limbs are on the move and in my experience, were increasingly relative.  Thus, in their gestural lines, my mark-making contains the experience-based improbability of Mr. Johnson's movements, and by their very nature they are a function of time.    A photograph in this instance would have been leveling in its amount of data and limited in its scope to designate cognition of the perceptual events.

Proud old men dressed to the tens, signing and moving to the words of fore-bearers is a comforting thing; it hints at an often lost sense of continuity in a secular and shifting time.
Posted by 7777