After the blistering heat of the previous outing, USk Seattle lucked out today – a mostly sunny morning with temps in the mid-70s! Although we’ve met at the Olympic Sculpture Park several times, and I’ve also sketched there on my own, the group hadn’t met at the park in five years (the last time was part of our Pity Party Weekend after the Vancouver, B.C., West Coast Sketch Crawl was cancelled). I was happy to get back there again, especially on such a perfect morning.

I was so happy, in fact, that I made no attempt to resist the cliché image every photographer likes to capture at the park: the Space Needle under the legs of Alexander Calder’s vermilion Eagle. Nine years ago, I made a nearly identical composition, and when I looked back at it, I realized how much the surrounding trees had grown. The first time I had sketched it, most of the Needle’s body was visible; this time, I barely framed its head.

Richard Serra’s Wake, another work that I have sketched before, called to me again. The series of gracefully curved monoliths needs people nearby to show their scale, and David sketching it gave me just that.

Leading up to and between those two sketches, I made a couple of other small sketches. One was a study for a full view of The Eagle that I decided was better as a thumbnail. The other was of Roxy Paine’s Split, which is one of several works at the park that I have avoided. It’s a shiny, metallic, realistically shaped tree that, in a sketch, can look just like an actual tree – I don’t really know how to draw it so that it’s obviously an artwork. I tried a small composition in black and white that probably looks like an ordinary tree.

The trip downtown was an opportunity to sketch more than sculptures – people! I caught several light rail commuters and even yoga students at the park participating in the largest class I had ever seen. Still rusty from the pandemic, my people-sketching skills needed the practice. 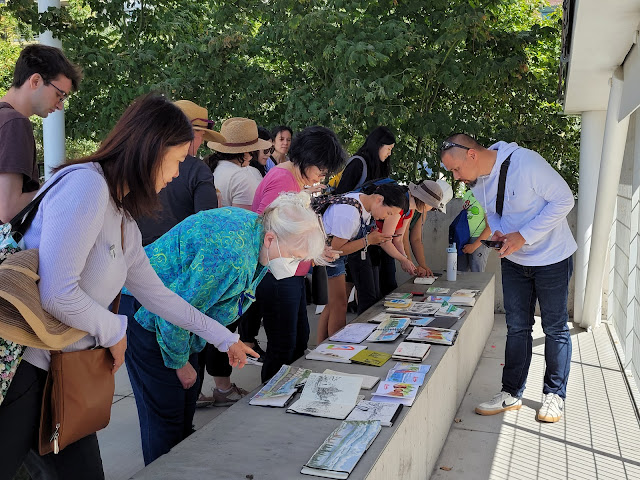