Another Shot at Rainier Square Tower

Back in March I sketched Rainier Square Tower from a handy, secluded terrace at Fourth and University (thanks to Andika Murandi for the tip!). It looked like an ideal spot for an Urban Sketchers outing: Lots of tables and chairs, most in shade, and views of assorted buildings – old, new and under construction. It was, indeed, ideal today, when the temperature hit the 80s. In the morning shade, it was downright chilly!

I took a second shot at the twin towers – the new one and the old Rainier Tower, built in 1977. The new construction’s stair-stepping looks strange right now, but when it’s completed (see the illustration here), the asymmetrical building will make more visual sense. According to developer Wright Runstad’s website, the “sloping design echoes the lines of Rainier Tower and allows for panoramic views.” They’ll make an interesting pair, for sure.

Next I turned 180 degrees to sketch the top of the 27-story Seattle Tower (below). Built in 1928, it was known as Seattle’s first art deco building. I thought that using my red/blue editing pencil might help me to identify and draw the slender slivers of light and triangles of shadows. But mostly I got confused by all the ziggurat layers that gave me a stiff neck.

Growing on the terrace were several Japanese maples. A different variety from the ones in my ‘hood that stay red year-round, these were green (and are probably lovely in the fall). Practicing their similar umbrella shapes the past couple weeks was helpful here. I also wanted to show that these maples were in the shade, while the tall trees on the street level behind them were in full sun. 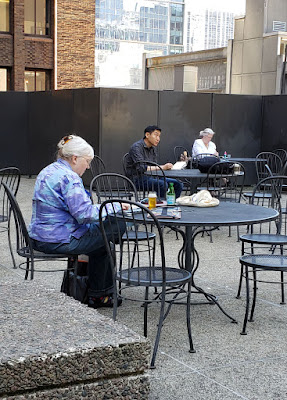