While the summer season offers a multitude of community festivals and fairs, the University District Streetfair holds the distinction of being the country’s longest-running festival of its kind. USk Seattle helped celebrate the fair’s 50th year on 10 city blocks of art and craft vendors, street food and music.

As I usually do at street fairs, I found myself irresistibly drawn to a wide variety of buskers. A classical cellist, a tuba and clarinet/washboard duo and a didgeridoo player (whom I had caught a couple of years ago at Folklife, too) were among the musicians performing for the crowd.

While sketching the guys on tuba and clarinet, I was standing near a very colorfully dressed balloon man who had created an eye-catching palm tree (I think?). He asked me to guard his prop and supplies while he went to use the restroom, so I obliged. When he returned, he told me a lengthy story about how a competing balloon vendor at another fair had stolen a hundred dollars’ worth of balloons from him, so he has been extra-cautious ever since. “I don’t trust just anyone to watch my stuff, though,” he assured me. “Usually I ask first if they are from Vashon Island to make sure I can trust them.” He had more stories to tell, but he was interrupted by customers (though he didn’t seem particularly happy about it).

Meanwhile, the tuba player came over to see what I was doing. Relieved that I was only sketching, he and the clarinet player had been afraid that I was writing them a citation.

The other balloon vendor I sketched had no drama to impart. A young man who was good with kids, he first started making what I thought was a tall purple crown, but he suddenly had so many customers that his headwear remained unfinished while I sketched. Later I saw in Swagatika’s sketch that it wasn’t a crown at all – it was the foundation for a well-designed unicorn.

After all that, I got hungry, so I explored the food booths, which are getting more and more state fair-like. Deep-fried PB&J, anyone?

Langostino sushi burrito, didgeridoo, and balloon man drama: Something for everyone at the U-District Streetfair.

P.S. Although I forgot to mention it there, today’s outing was a personal celebration for me: It was my seventh anniversary since joining Urban Sketchers on May 20, 2012! 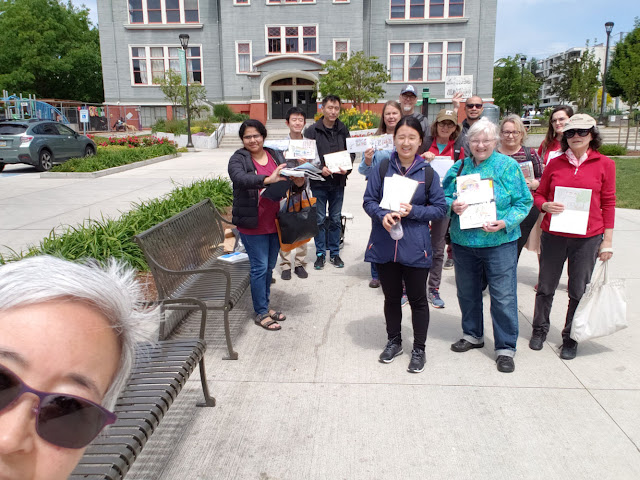 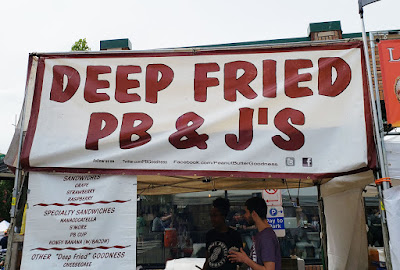 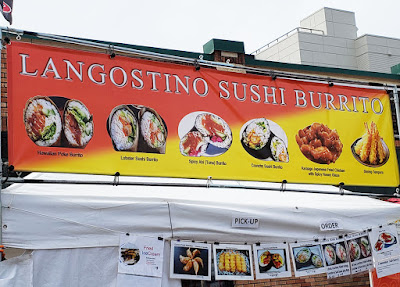