It took me almost 3 hours to travel from where I live in North Marysville to the Washington State Capital Campus in Olympia, where Seattle Urban Sketchers were to meet at 10 AM. Roadwork, detours, two previous accidents, etc.- it's a whole other story. Needless to say, I arrived late.

Knowing that we would be sketching at the Olympia Farmers' Market later in the day, I parked my car there and rode the DASH shuttle bus to the meet up with Seattle and Tacoma Urban Sketchers at the Legislative Building steps.

We are taking part in the 48th World Wide Sketchcrawl. 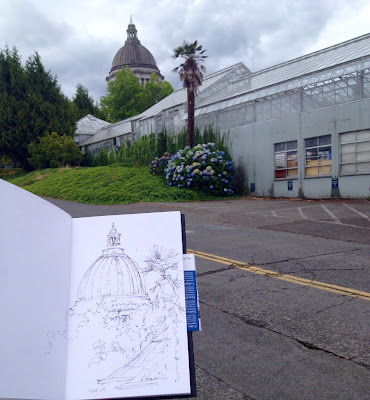 As I got off the bus, and stood there for a moment to orient myself, a voice in the air called my name. There was Kate, one of our USk Seattle contingent, choosing a spot to sketch near the bus stop in case more sketchers arrived. She had all the information needed, including helpful maps of the local area that she had printed out ahead of time. We also got new badges that Kate had prepared just for this occasion, The 48th Quarterly World Wide SketchCrawl Day in Olympia
Thank you, Kate and Jane!

I knew I had an abbreviated amount of time to sketch at the first location, so I chose a less challenging viewpoint that I had spotted on my bus ride up from the market.

It was amazing to think that people all over the world were sketching simultaneously today. While I was waiting for everyone to arrive for a group photo, my cousin from nearby Tumwater stopped by and surprised me! It was a nice sized group (at least 20 or more) from far and wide who shared their sketches at the end of the morning. Time for lunch! 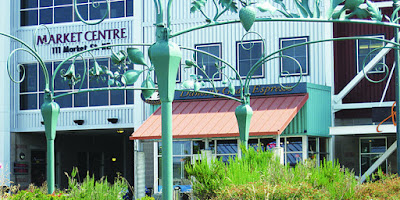 Sketch Crawl PM: Olympia Farmers' Market
We moved straight down Capitol Way from the Legislative Building to the Farmers's Market for lunch and the afternoon half of the sketchcrawl. (See DASH map above) 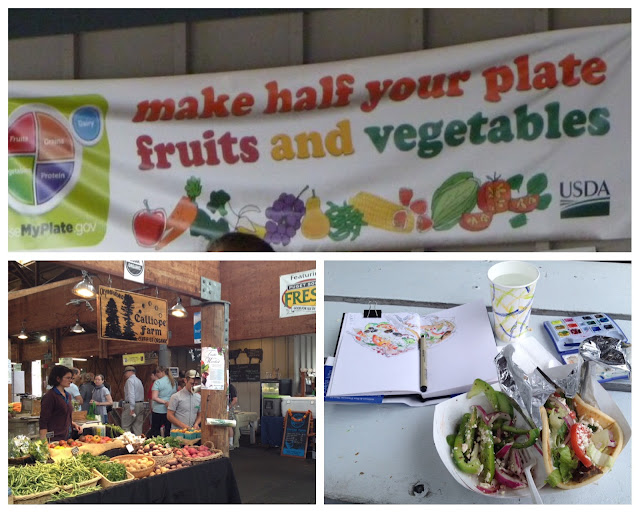 The sign says "Make half your plate fruits and vegetables". Easy enough to do if you order a Gyro and Horiatiki Salata (Greek village salad) from Pithos Greek food stand.  Each food stand has at least one large picnic table for its customers. Some of us brought our lunch over to the huge covered stage and dining area in the center of the market, where Tracey Hooker and his band provided the day's live entertainment.
After sketching my lunch, then eating it, I only got a few speed sketches of the bass, trumpet and guitar players just as they finished their set.  It wasn't until later that I discovered that Tracey D. Hooker is a Grammy award winning trumpeter! I did get to see Tina's sketches of the performers before we said farewell.  I have long admired Jane's sketches of the market and now I can say it's one of my favorite places to experience as well. 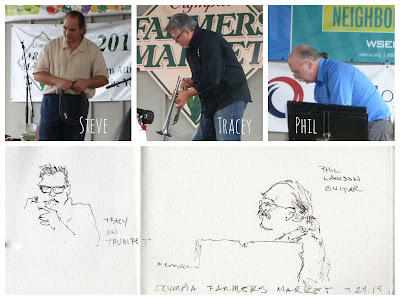 Most of the sketchers drifted off during the afternoon to resume their own itineraries, but three hardy souls met in the little corner park to share our sketches at 3:00.
I trust that all those taking part around the world have also enjoyed their own experiences today during the 48th Quarterly World Wide Sketchcrawl!
Saturday, July 25, 2015