From Giant Coffee Cups to Jackalopes - in Fremont, of course 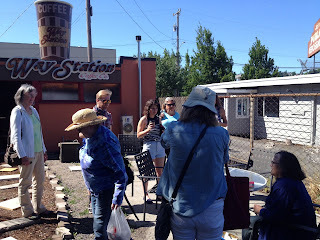 The Fremont sketchcrawl:
Gail gave an overview of the area as sketchers arrived at the back patio of the Way Station Coffee House. There was a plethora of eclectic subject matter for Seattle Urban Sketchers to choose in the Fremont district on this warm, breezy Sunday morning, June 14, 2015.

The Burke-Gilman Trail runs right along the middle of today's four block area. There were plenty of cyclists, walkers, etc. out this morning. 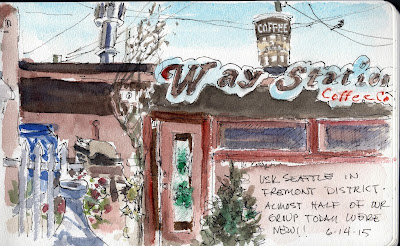 As I sketched my backyard view of the Way Station, I realized the scale of my coffee cup went from a Giga-Grande to an espresso, relatively speaking. There are enough other sketches of it in previous posts with proper scale, if you need it.

Next, I took a walk northwards up the street and was stunned by the exterior of  Drunky's Two Shoe BBQ! Horseshoes in the pavement, a "Road Window", big Western Style false fronts on the building and a shiny Airstream in the back. This part of Fremont isn't as polished as the area down by the Fremont bridge, but it is every bit as eclectic. I think it has a kind of  60's vibe.
Mike, the Pit Master of Drunky's BBQ, says that the Airstream in which he now lives was once the first place where Drunky's sold their BBQ. A few of us went back to the restaurant for lunch after sharing our sketches.
There were too many things I wanted to sketch as I gazed upwards during lunch. I managed to sketch the crocodile head and the jackalope, then wrote a short list of things to sketch next time: 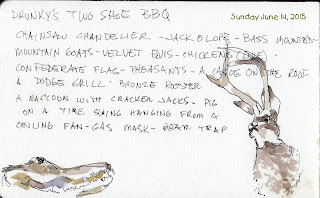