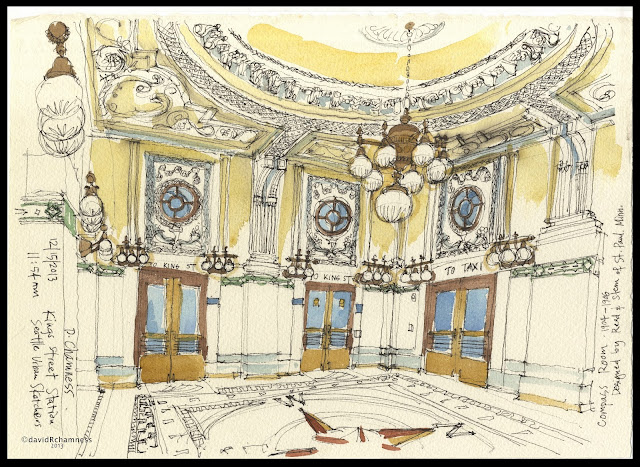 It was difficult to choose what to draw because of the over whelming ornamentation throughout the station.  I ended up sitting in the Compass Room (which acts as the entry vestibule to the Great Hall waiting room). I thought it would be simpler because it was smaller and more contained. Ha! I normally like to finish a sketch in about 45 minutes, so that I can have time for a few sketches.  This one took 2 1/2 hours!
During my drawing time I had many people stop and watch me sketch because I was on their path to and from the train.  One particular station worker, John, stopped for a chat and was interested in joining us for a future sketch outing.  He said he had not drawn since elementary school, but our group had inspired him to take it up again. 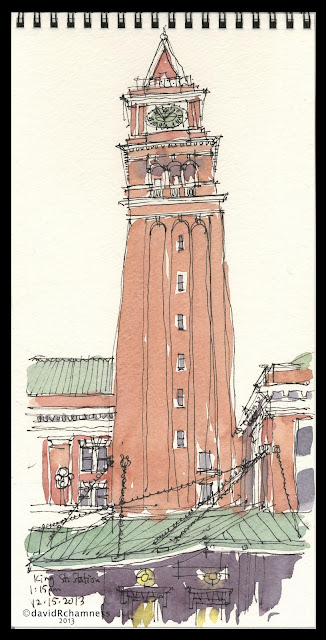 After the sharing time I went out and took up a spot that others had drawn earlier.  I wanted to capture the campanile because it is such a Seattle icon.  I found out later that it was the tallest building in Seattle in 1906.
My sketch of the tower looks like an earthquake hit the top. That's what I like about sketching on site, the character of each drawing!   A great way to finish off the year with Seattle Urban Sketchers!