USk Seattle’s outing in upper Queen Anne was two events in one: A celebration of our 13th anniversary and also participation in the 76th quarterly World Wide SketchCrawl.

Prepared for the meetup at Kerry Park and its sweeping skyline view, I brought along my panorama-format Stillman & Birn Beta sketchbook. I pack the book whenever I travel, expecting to see and sketch some new skylines, but I haven’t traveled much since 2019. It had been a long time since I’d sketched the Kerry Park skyline (I think 2017 was the last time), so I decided to pretend I was a tourist in Seattle and sketch the postcard view of the Space Needle (unfortunately, Her Majesty Rainier was hiding behind the thick overcast). Plenty of actual tourists stopped by to snap their selfies as I sketched (and some asked me for help taking their photos) – it was a popular spot.

After that, I took a walk around the Queen Anne neighborhood, which I dearly love for all its beautiful, old homes. (My first apartment was in Queen Anne, so it’s also nostalgic.) Along the way, I made a small sketch of Queen Anne United Methodist Church.


Circling back toward Kerry Park for the throwdown, I made a brief stop at Parsons Garden, which always feels cool and serene compared to the touristy skyline. I caught some girls picnicking just before a mom came by to break up the fun.

In the early years, USk Seattle used to try harder to make our outings coincide with the SketchCrawls, but truthfully, we admins don’t always remember to check the dates when planning. Lately it has fallen by the wayside. But after we sent out the announcement for the Queen Anne outing, Parker Gambino, enthusiastic urban sketcher and SketchCrawler, informed us that the date coincided with the 76th SketchCrawl. Formerly an active member of USk New York City, Parker now lives in Seattle. I was grateful to him for reminding us of the SketchCrawls again.

What a great turnout – I counted more than two dozen at the throwdown! 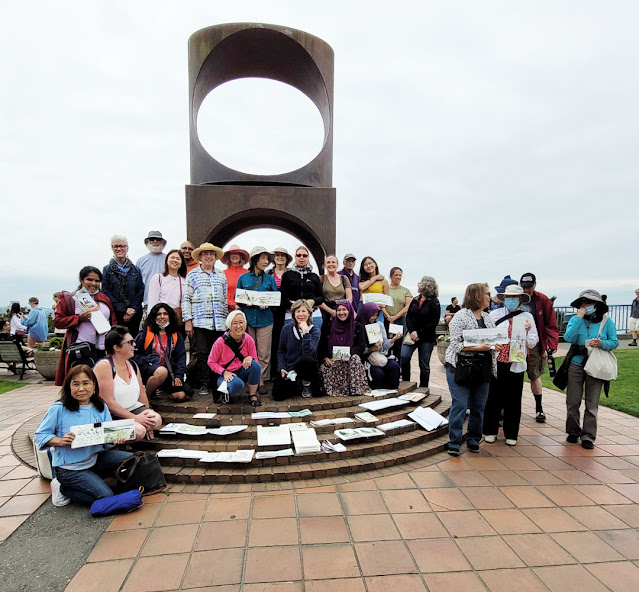