The monthly outing of Urban Sketchers Seattle was at the iconic pop-culture hub, Funko store in Everett.

The weather was bright, sunny with chilly winds. Being Sunday I was accompanied by my husband and daughter too. I was running late for sketching. I selected a spot near the bus stop on Wetmore Avenue diagonally opposite to Funko, to get the entire view of 1920's historic building and also the warmth of sun. This entire structure is remodeled with the display of huge pop-icons. I did the pen work only as my hands were getting numb, so left the coloring part for later.

After taking the stroll of store around, I sketched the pop entities Harry Potter and Pink monkey with fluorescent green jacket at the front entrance. Funko has only one floor and other floors are used for offices. I met other sketchers here, who were sketching the front view.

My daughter was thrilled by Harry Potter section inside the store and she bought her favorite character : Hermione Granger.
It was fun to sketch these characters which have so much impact on kids and adults alike. I loved the sign board with tiny lights and revolving crown icon.
Before going for the meet-up I did Funko sign board and few more pop-icons displayed on the building. I was fascinated by these highest selling geek figures made up of vinyl and bobbleheads. Unfortunately I was unaware of many of these characters. 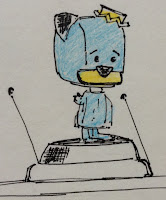 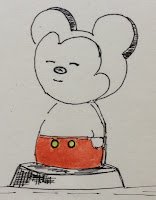