Back to the Center of the Universe

I worried that news reports of dire traffic conditions from freeway lane closures and Pride events would keep sketchers away from the Center of the Universe, but I needn’t have. Even predicted temperatures in the mid-90s yesterday brought a good turnout of USk Seattle to the statue of Lenin and the rest of the Fremont neighborhood’s funky environment.

Although I knew I had sketched Lenin before, I didn’t realize until I checked my blog that it had been as long as four years ago at my first outing to Fremont (a month later I sketched him again during Gail and Frank’s USk workshop). It was high time to sketch him again, and I did it first thing while the morning heat was still tolerable.

For the high noon sun, I knew exactly where I wanted to sketch: In the cool shade of the Aurora Bridge, where the Fremont Troll waits quietly. Although a troll under a bridge is supposed to be malevolent, the only other time I sketched him, also four years ago, he struck me as more curious than scary. Yesterday I thought I saw some surprise and endless patience in his single eye (now shiny silver, though in 2013 it was apparently red) as tourists climb all over him, day in, day out. 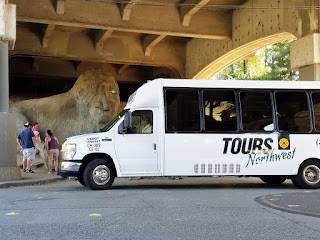 Speaking of patience, I was losing mine as every five minutes or so, a tour bus would come by and disgorge a pile of said tourists so they could photograph each other. The sketch took me much longer than usual because I had to keep waiting for the view to clear. Still, I was in the shade with a cool breeze blowing through. Even on the hottest day of the year, I’d rather be sketching than not.