It's been over 36 years but we used to live in San Luis Obispo on the Central Coast of California. We still have good friends there and periodically meet up here, there  or somewhere in between. In late May I had a good couple of weeks in the area staying with a friend and putzing around the county and points south.

Our friends own Sauer Adobe one of SLO's historic sites sitting just across the street from the Mission and just around the corner from the city's historic Chinatown district. Chinatown now consists of 3 buildings - Ah Louis Store, Mee Hung Low Restaurant and the brick candy store (now a real estate office.) The historic roots - Chinese, Native American; Spanish, of these few square blocks tell the story of San Luis Obispo.


Chinese arrived in the area in the 1800's providing manual labor for two converging railroads. At one time there was a sizable Chinese population, but time and racism drove most of them out. The main identifier is the old Ah Louis store, founded in 1874  by Ah Louis of Hong Kong, as a grocery and general merchandise store, employment office, bank, post office and pharmacy for the Chinese population. Currently it serves as a retail outlet for an events producer.

The Del Monte Cafe is another charming site, sitting directly across the street from the Railway Station. The building opened as a barbershop in 1919 then served as the neighborhood grocery before a local family turned it into a thriving restaurant. 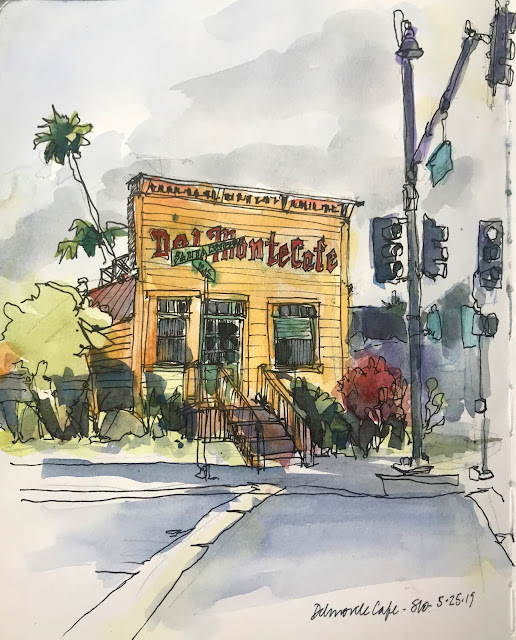 My friend and I took a mid-week drive up to Cambria, originally a Chumash Indian site that sits between San Simeon/Hearst Castle and Morro Bay. When logging and mining populated the area, the settlement was known as Slabtown because its first buildings were made from rough slabs of wood. Now named Cambria, probably after a Welsh town,  its a lovely village attracting visitors from all over the world. 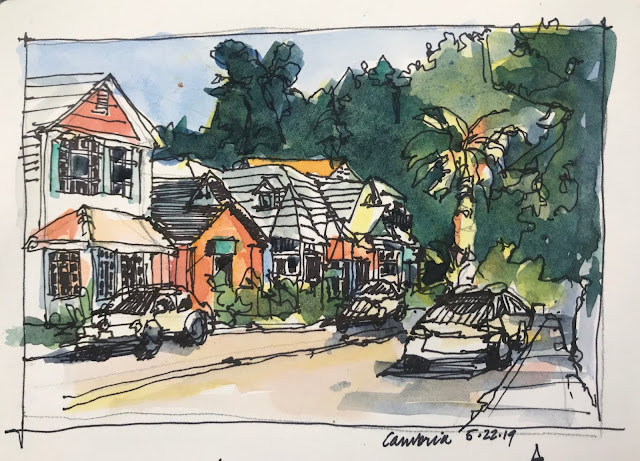 There's been a lot of development for better or worse since we've lived in SLO. This little shopping center hosts the usual Starbucks, Barnes and Noble, a few little cafes but it was a perfect spot out of the cool spring wind to sit on a sunny bench and sketch. 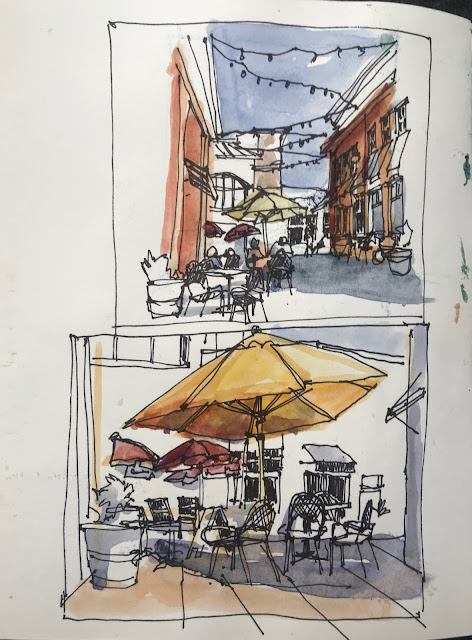 The other fun thing I did while in my old hometown was meet with some local sketchers. There isn't an official USk chapter there yet, but stay tuned.  I think we may have stirred the pot for the makings of one.
Posted by Jane Dillon Wingfield: janewingfield@gmail.com