Fire Station No. 2 and Belltown

It was déjà vu all over again.

Just like Friday, I woke today to pouring rain, wondering if I would be alone at the meetup location. An overhang and some large trees would offer some shelter to sketchers who wanted to face Fire Station No. 2 in Belltown, but if we got the thunderstorms and heavy rain forecast by weather.com, it wouldn’t be much fun. In addition, the Storm’s WNBA championship parade at Seattle Center was expected to make traffic and parking difficult in the area.

But again, just like Friday, the showers turned into sunshine, and the handful of sketchers who met me at the start time turned into a strong showing by the time of the throwdown!

Despite the blue sky directly above, I was leery that the rain could return at any moment and reluctant to commit to a page-size composition that I might have to abandon. Instead, I decided to make a series of small sketches in Michele Cooper’s montage style. My first stop was Station No. 2, the focus of our outing. Designated a landmark in 1985, the 1921-built facility houses one engine company, a ladder unit, a medic unit and a reserve medic unit (some of which we saw coming out and back into the station as we sketched).

Next I wanted to capture the Space Needle flying Seattle Storm’s flag. I’m not a basketball fan, but it was exciting to see a women’s team being celebrated as an alternative to the usual Seahawks’ 12 flag at this time of year. (The drops on my Needle sketch indicate that standing under a tree while sketching isn’t necessarily a good strategy when it has been raining all night.)

The historic bell had captured several other sketchers’ attention, and for good reason. From the station that was near the same location in the 1800s, the bell sounded an alarm that could be heard for “nearly 10 miles,” said the plaque. “The horse-drawn engine then responded to the location.”

(Contrary to my speculation, the Belltown neighborhood was not named for this bell, which had an important emergency response role in the 1800s. It was named for William Nathaniel Bell, a member of the Denny party that originally settled Seattle. In addition, Virginia Street and Olive Way were named after his children. It’s a good thing I sketch and blog about my sketches or I’d never learn such local trivia.)

By then the strong wind had chilled me, so I went to look for coffee. Walking back, I looked up at the numerous cranes and construction sites in Belltown. To complete my montage, I picked an apartment complex going up on Second Avenue and Wall Street (one of many such boxy buildings popping up all over the city).

Once again, hooray for hardy sketchers who say bah-humbug to dire weather forecasts! 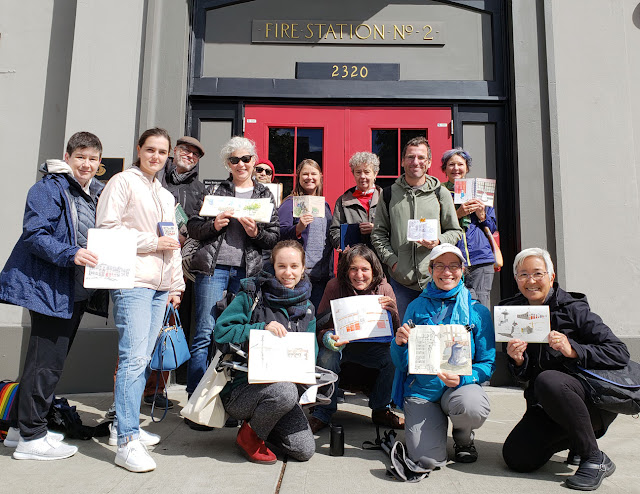 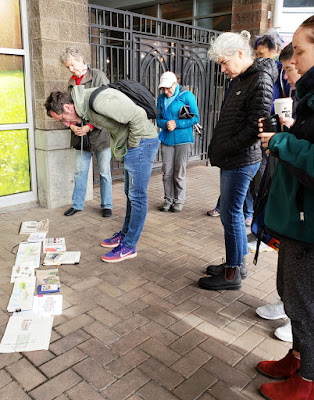 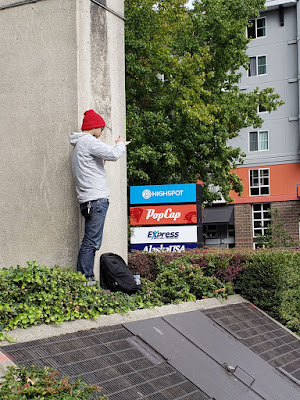 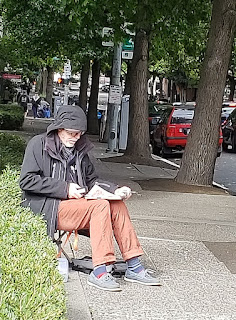 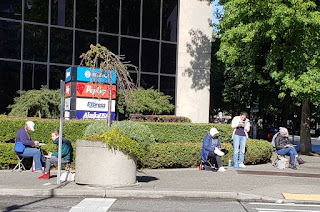