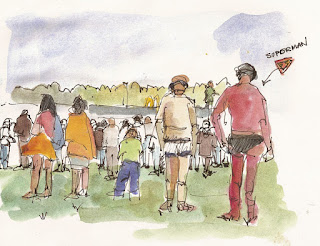 The sign said forty-two degrees at the 2013 Polar Bear Plunge at Long Lake in Lacey. Over 600 swimmers wearing anything from bikinis, to tutus leapt into the icy lake to welcome the new year.

I got there early and watched as the park steadily filled with swimmers and fans wearing flip flops, Hawaiian shorts, towels, parkas, wigs, jackets, and fur-lined boots. Fires on the beaches warmed the hands of anyone who wanted. The sun was bright and the PA system announced the water was warmer than the air.

A young guy in skivvies and a diving mask slathered his friend with red body paint complimenting the golden superman “S” on his friend’s chest.

The swimmers lined the dock standing five deep in places, bracing themselves against the cool air. The first rule to polar bear jumping is “Don’t shiver”.

After watching the excitement and thrill of the polar bears I could completely understand the idea and with a little, ok, a LOT of arm twisting and hand holding I might just consider it for 2014. My only requirement would be a hot tub next to the dock. I think I'm safe.
Posted by Jane Dillon Wingfield: janewingfield@gmail.com