A friend told me about Urban Sketchers about ten years ago and I immediately thought, "That's sounds like what I am doing" and started following and posting on my flickr site (https://www.flickr.com/photos/alexhollmann), but only recently joined the Seattle Urban Sketchers Facebook group, which has led to contacts with other urban sketchers. I was delighted to be invited to become a correspondent.

There is so much that I like about urban sketching, but the main thing is going out into the world and losing myself in something bigger by standing or sitting quietly and observing and being drawn deeper into what is in front of me. Looking at and registering details and getting at the larger structure, whether of a person, building, or landscape, absorbing atmosphere and mood, and thinking about the past and present behind that person or object is a wonderful act of meditation.

I was born and brought up in South Africa and was always drawing as a child. Drawing was a way to create a world around me with things I wanted. One of my earliest creations was a version of Disneyland, based on photographs from an old National Geographic, on sheets of paper glued (to my mother's horror) to the walls. Later on I drew steam locomotives, private trains, research vessels, and planes fitted out with chemical laboratories and divans and armchairs upholstered in red leather and velvet, ready to take me anywhere in the world for the sake of science. (I loved 19th c. illustrations and Jules Verne.) As a teenager I drew less and dropped the science and became obsessed with black-and-white photography and printing my own photographs. I took pictures of people on buses and trains, and portraits when I could get a willing subject. I learned a lot about composition and light and shade, and when in my mid-twenties I began to draw again and started painting in watercolour while in graduate school in the U.S, I think that experience with photography helped me a lot.

Ever since then I have drawn more and more, at first mainly while travelling, but now almost every day. In the last year getting a bike and having more unstructured time due to the Covid pandemic has led to an interest in the waterfront of Seattle and an explosion of drawings of water and boats—the older the better. Below are two of my sketches from this month, both drawn at Seattle's Fishermen's Terminal. 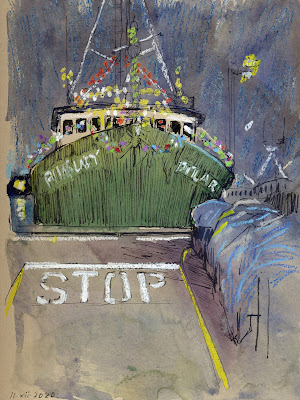