In the wake of the recent wave of BLM movements, my friend Alexander and I have been meeting up in the Central District to make a point of sketching, patronizing, and learning about Black-owned businesses in our area. To be sure it's a small gesture, but it feels good at this moment to connect my sketching practice and what's been going on in the country for the last month or so. It's also been fun to meet some of the neighborhood characters & some of the shop owners.
I'm now making myself show people what I drew before I leave the spot. Trying to make connections in the community and spread positive energy! Everyone likes feeling appreciated, and drawing their stuff is one way to do it. 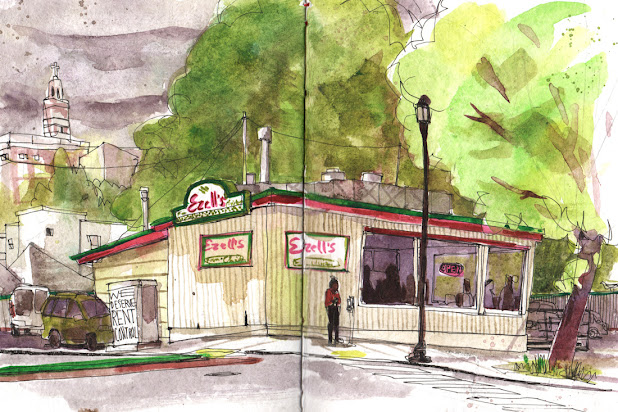 Ezell's Famous Chicken on 23rd. I had never eaten there before, and spending like $11 on a combo meal made me full for the entire day. They even accidentally (?) gave me an extra piece! Ezell's claim to fame is that Oprah apparently flew in some of their fried chicken to Chicago because she was craving it so hard. 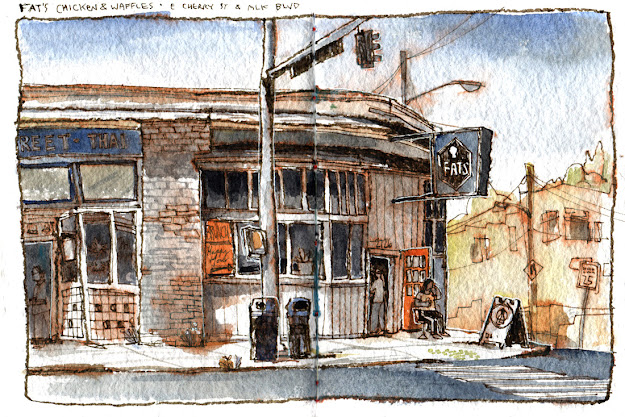 Fat's Chicken on E. Cherry & MLK. This was the most fun sketch we did. Not only is this corner building really wonky and neat details, the owner (who I unknowingly put in the sketch, sitting outside the orange door) was so psyched about our drawings they gave us free to-go cocktails. I also ate some more chicken here, which was super tender and crispy. That might be enough fried chicken for me for the rest of the summer, but it was worth it. 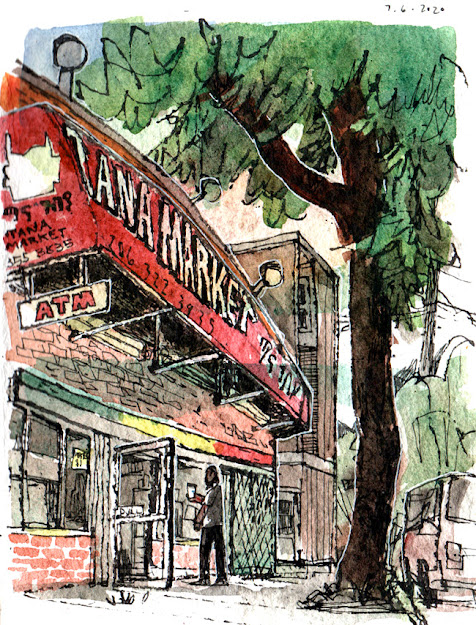 Finally, here is Tana Market just down the way on E Cherry. I had become familiar with this Ethiopian bodega from buying canned beers from its well stocked fridges for our other nearby sketch outings. If you want fresh baked injera, this is the place! Alexander drew the juice bar across the street, while I was more attracted to Tana's awning and simple storefront. When I showed the drawing to the guy at the register, he did not react at all.
Posted by Eleanor Doughty