Church without its doors

There has been some drama in Renton. It all happened while I was on my epic driving trip across the country. **

The United Christian Church is just a few blocks away from where I live. I read about what happened while I was  gone.  From the article: "The church put up six doors reading 'God’s doors are open to all,' in honor of LGBTQ+ Pride month, a symbol that is part of a greater city-wide message of visibility this year." The doors were in the colors of the Pride flag.

And the doors were vandalized. Twice. The FBI is now involved as the second attempt involved possible arson and an explosion.   The good news is the citizens of Renton banded together to replace the doors. A local social media group to which I belong put out a call for replacement doors and several were offered.  The display was refurbished after the first attack. 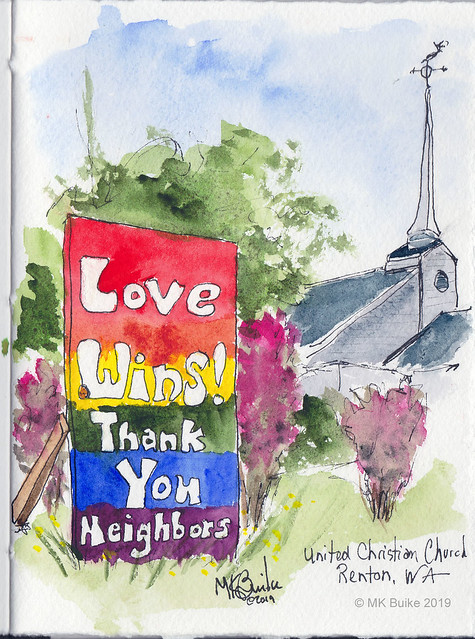 Once back from my long trip, I went over this morning to sketch the doors. They were all gone but in their place was a single door, giving thanks to the community. Dee, a member of the church, stopped by to talk to me while I was sketching. She explained that the church members who put up the doors were away when the second vandalism happened so the doors were not replaced.

While these are discouraging events, there is the silver lining of a larger, supportive community.  Love Wins. 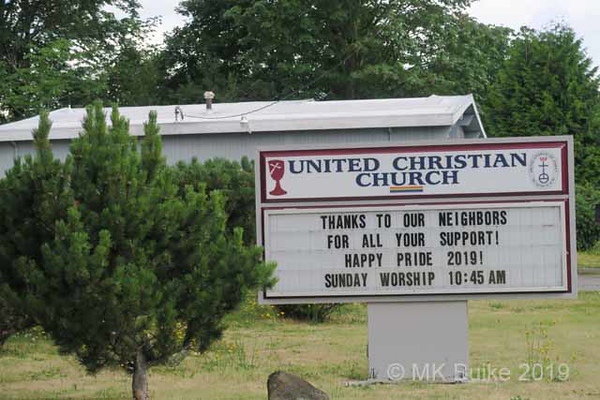 UCC of Renton website.  I encourage you to look at the graphic on the home page!
Seattle Times article on the vandalism.


** I'm still working on my post(s) about the trip.
Posted by MK Buike