Fearless and Undaunted at the Northwest School

Sometimes when I talk to people who are interested in the idea of sketching but haven’t yet started, I can sense their fear and hesitation. So many obstacles in their minds – real and imagined – keep them from putting pencil to sketchbook. Fortunately, only adults seem to be afflicted with this hesitation; kids have no such fears. Once in a while I have the opportunity to see children with their sketchbooks, and it’s a happy sight.

For the third year, the Northwest School and the Seattle Architecture Foundation invited Urban Sketchers Seattle to lead class sessions in urban sketching. (I reported on my experiences from 2016 and 2017.) Here’s how the school describes itself:

“A vibrant, intellectual home. A warm inclusive community. A dynamic liberal arts education for grades 6-12 that prepares students to think critically, act compassionately, and discover their place in the world.”

Whenever I take part in this program, I feel some envy that I never had a school like that to go to when I was their age! Among the wide and varied curriculum the pre-teens can choose from is a design and architecture class, and that’s where Urban Sketchers fits in.

A show of hands indicated that about half of the dozen kids enjoyed drawing, and the ones who did were primarily interested in drawing from their imagination. After talking briefly to the students about my experiences as an urban sketcher, I passed around several of my sketchbooks to look through. Their teacher, Teresa Wang, then led us in a few rounds of blind contour drawing. The kids especially enjoyed doing blind contours of each other, the results of which were hilarious, based on their responses!

After that, we all went outside to the school’s garden for some urban sketching. With nothing more than the pocket-sized notebooks and pencils that I had brought along for them, the kids went at their task with gusto. Even the ones who didn’t express particular interest in drawing chose their views and put their pencils to paper immediately. I was taken by how seriously they approached their assignment: to draw what they see, not what they imagine. The results were impressive. 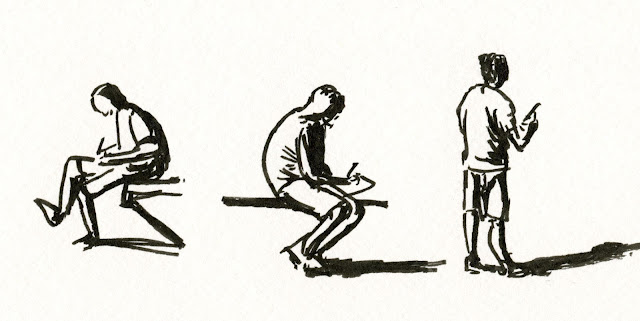 I left feeling hopeful that they will take their undaunted selves into adulthood to continue drawing as fearlessly as they did today. I wish everyone could do that.