I've been too busy to sketch in the amazing weather we've had in Seattle lately, so I wanted to share some drawings I made last year on a trip around Bolivia and Chile. This post is about La Paz, Bolivia, the most visually interesting of the big cities we went to; its topography is extreme.=!

After a tedious 3 flights from southern Chile, we landed in La Paz super early one Monday morning and caught a couple Zs in the airport lobby until the sun rose. Our Airbnb was deep in the valley of La Paz, while the airport is on the high plain, El Alto, above the city; the taxi drive down the scary-steep canyon roads was stunning and terrifying. The city is characterized by its elevation: at over 2 miles above sea level, many visitors get sick from the altitude, but for some reason it wasn't bad for us (I had more trouble acclimating in Denver, a mile above sea level). 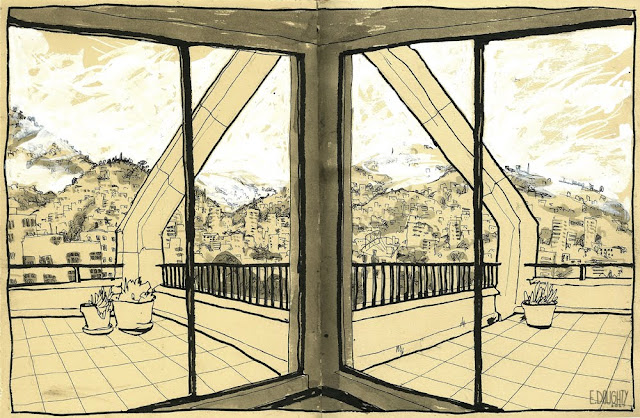 Rain usually accompanies the early-day cloud cover, so on another morning I stayed inside to draw – still with an amazing view. In La Paz, the wealthiest residents choose to live as low in elevation as possible, apparently to take advantage of milder weather. Interestingly, most other cities I’m aware of have the opposite tendency. We were in the more upscale central valley, which takes advantage of the surrounding canyon walls - shielding its residents from the high winds of the plains.