(Although it includes only one of my own sketches, I'm hoping this exhibit review will be of interest to urban sketchers. The exhibit has historical importance and is a rare showing of this particular experience through sketch reportage.)

When I was a child, I remember looking through our family photo albums and noticing that while there were many photos of my oldest brother Richard, my sister Linda and myself when we were babies, there were very few of my brother Frank. When I was older, I came to understand the reason: Frank was born in 1942 inside Tule Lake internment camp during World War II, where incarcerated Japanese Americans were not allowed to have cameras. My mother explained to me that the few photos of him during those years were taken by friends in the military who happened to be visiting them in camp and later gave my parents the photos.

The sketchbook and paintings of Takuichi Fujii, now on exhibit at the Washington State History Museum, are a rare opportunity to view first-hand images of the internment experience where photography was not allowed. A first-generation Japanese American, Fujii was already a painter when he was first confined to the Puyallup detention center and later relocated to Minidoka, Idaho (the ultimate destination of my family, too). His 400-page sketchbook shows raw pen-and-ink drawings of his day-to-day life: people lining up for meals; using toilets and showers with no privacy, not even curtains between stalls; killing time by playing cards; the watchtowers and military guards. On the facing pages of sketches, Fujii wrote diary entries describing what he saw and experienced.

The exhibit includes some oil and watercolor paintings he made before, during and after the war, some based on his sketches, as well as a few small sculptures carved from fence posts. According to the placard, “When part of the fence was removed in 1943, people quickly salvaged the materials for use at their barracks. The carved faces of Fujii and his wife are worn by years of having been caressed.” (My sketch of these sculptures is shown above.)

While the finished paintings are interesting and more polished, I found the sketches to be the most moving and heartbreaking images to view. My only complaint about this excellent exhibit is that the sketchbook pages can only be viewed as a digital slideshow that advances automatically. I would have liked to have studied a few of the sketches at my leisure. I also wish each page of his written diary had been translated as part of the slideshow.

Fujii may have been one of very few reportage sketchers of the Japanese American internment experience, with his work only now having an audience. 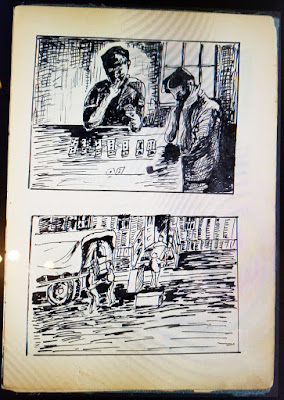 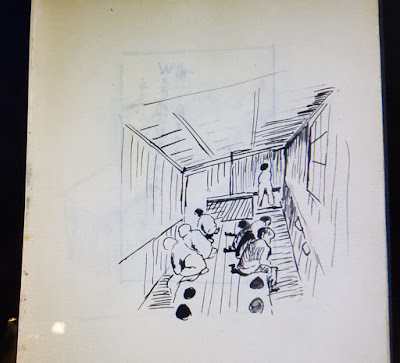