Hi, folks, I'm Dave Eggleston and this is my first post for USk Seattle. I've lived and worked in Redmond for 9 years now but seem to spend most weekends visiting all over Puget sound. I love the area and City and have seen thousands of things that I want to sketch. I've been doing sketches on and off since I was a kid but only in the past few years have I seriously carried around a sketchbook everywhere. I don't sketch anywhere near as often as I like but when I'm ready the book is with me. Lately I've done a lot of sketching on busses--it seems to be the one place I can grab 20 uninterrupted minutes--and train commuters, too:

I'm also posting a couple of pictures from today. The NW tower of the Freemont Bridge, which may be housing their artist in residence (?) viewed during my STP training ride this morning. The Burke Gilman trail has lots of great subjects from people to buildings to feral chickens in Bothell. Though I don't recommend standing and drawing after riding 30 miles as I did for this sketch! The second sketch is of the back corner of Serious Pie, a great pizza joint downtown. Sadly I sat on the wrong side of the table, with back to the cook and stove. But the pictures on the wall were too intriguing to pass up. The food came too fast to finish up the picture this time. 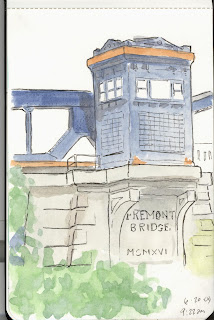 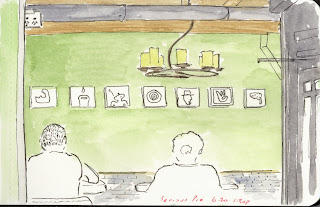