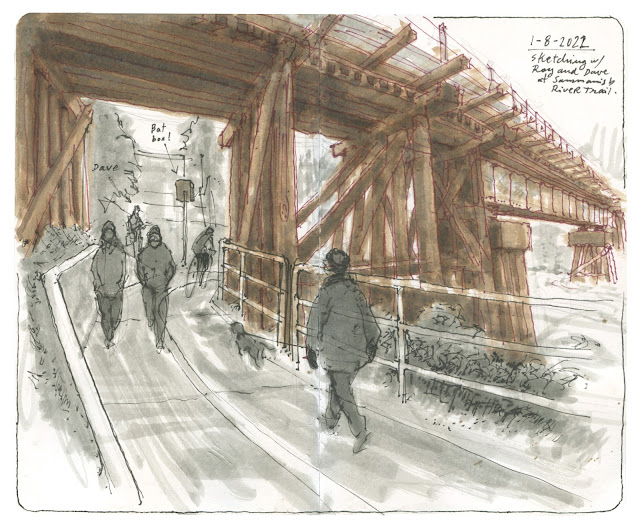 It’s a chilly January morning, but this picturesque bend along the Sammamish River Trail is busy with Sunday walkers and quite a few cyclists.

My sketcher pals, Dave and Roy, and I aren’t deterred by the weather either. We are here sketching the old rail bridge that crosses over the river and the pedestrian path.

It is an intricate structure of wood, concrete and steel that poses the kind of drawing challenge I often enjoy: fitting a wide scene across a spread of my pocket sketchbook. To make it work, I force the perspective on the right side of the page, but try to avoid too much distortion.

If the rail tracks were still in use, I’d get to add some freight to my picture. But including a few of the people who go by (and a dog!) is enough to make the scene a bit more lively.

A bat box mounted on a pole by the side of the trail also makes it into my sketch (do you see the arrow pointing to it?). It’s the first time a see a bat box. Actually, I had never even heard of bat boxes until Dave brought this one to my attention. He says bats hang in the tight space inside, sleeping head down, just like bats do.

The Sammamish River Trail extends for about 11 miles between Blyth Park in Bothell and Marymoor Park in Redmond. If you want to explore the area where we set out to sketch, it is just around the corner from Woodinville’s Wilmot Gateway Park, another interesting location along the scenic trail that I might try to sketch another day.
Posted by Gabriel Campanario