Last year’s post about USk Seattle’s annual holiday visit to Swansons Nursery was entitled “Reindeer, Santa and Mobs at Swansons,” and I probably could have used the same this year. Luckily, the weather was all the way up in the high 40s and dry, so sketching at the reindeer pen and out in the plant displays was reasonably comfortable.

Before the crowds got thick, I started with the reindeer. Instead of Blitzen as in previous years, Dasher’s pen mate was Comet (I suppose even reindeer get some time off during the holidays). Every year I have difficulty scaling their antlers accurately – they seem so unbelievably large! I learned that it takes eight months to grow them each year.


My next stop was Santa (the same one as in previous years). When I arrived, a tiny infant had been placed in Santa’s arms, and for a few minutes while the older brother finished bawling, I had a good view of them. Suddenly the brother apparently gained courage and joined them, and mom sat on the chair’s arm, completely blocking my view. Whew! That was close. 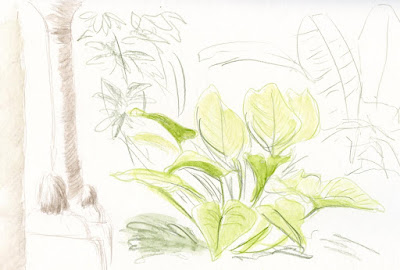 By then I was hungry, so I went to the café for a snack. Chatting with Robin while scarfing down a scone, I hastily sketched the jungle of exotic greenery in the remaining time before the throwdown.

Sketching at Swansons with my USk “family” is a holiday tradition I cherish (we’ve been going every year since 2012). 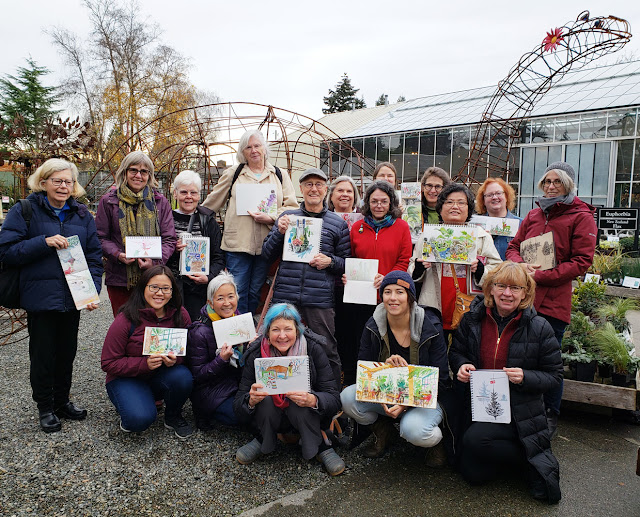