On the road with Mañana: Sketching in Port Angeles and Salt Creek, Washington

My husband Scott bought an old RV that he called Mañana about 5 years ago. She is a bit clunky but functional, and very loved. It's is a relatively small RV, which makes it easier to park and travel around cities.

A couple of sketches of Mañana are shown below. The first is Mañana in our driveway in Greenwood, Seattle, where she usually sits when we are not traveling. The second sketch shows the interior, during our last trip.


Last week we took a pre-Labor day trip with Manãna on the Washington coast to Port Angeles and Salt Creek. The day we left there was still some smoke lingering from the forest fires, and the weather was grey, cold, and windy. But we were looking forward to that peculiar sense of freedom that comes from packing our stuff in the RV and just go.

We drove to Edmonds, WA in the late morning and took the ferry to Kingston (no sketches on the ferry: I can't resist the free puzzles left on the tables for passengers to work on) and then drove the 60 miles to Port Angeles.

After a quick walk, we stopped on the waterfront and I found a good place to sketch the view, sheltered from the strong wind. I sat in front of the Feiro Marine Life Center where a couple of young women dressed like tooth fairies were offering to visitors free entrance to the museum and toothbrushes. 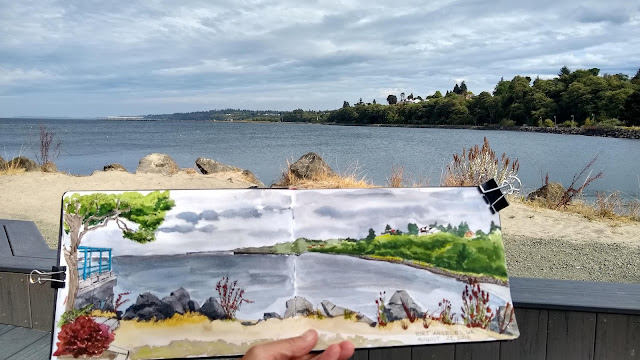 We were also fascinated by the large paintings showing the life of native americans and settlers in the early days of the city. Apparently there were a lot more trees before the European arrived.

In the evening we drove a few miles west to the Salt Creek/Tongue point camping site. It was almost dark when we arrived, so I only managed to do a quick sketch of the tree stump in front of our RV.


The second day it was much sunnier but still very windy. In the morning we went for a run on the Olympic Discovery trail, a 100-mile trail on the Olympic peninsula connecting Port Townsend to La Push.

Back to Port Angeles, I did a second sketch of the waterfront, this time looking at the City Pier and the Observation Tower. Even with the sun, I still needed a windbreaker, a scarf, and a hat to keep my body temperature at an acceptable level.

It was a great little trip and we are planning to travel more with Mañana in the next few months, venturing farther and for longer periods of time to discover the beauty of the Pacific Northwest. Stay tuned.
Posted by AntonellaSketches