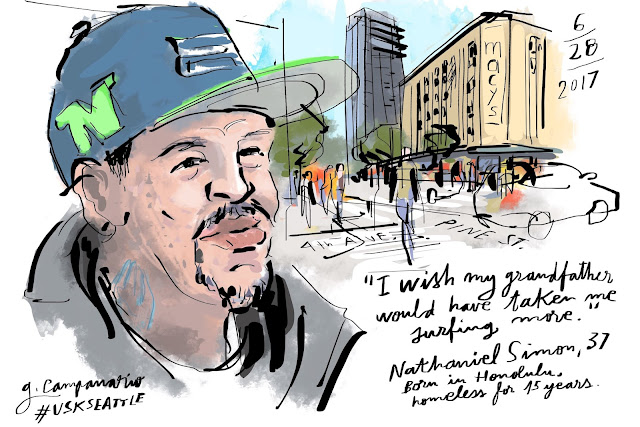 When I approached a group of people at Westlake Park and explained that I was hoping to sketch and talk to someone experiencing homelessness, the first question I got was: “Do we get paid?”

My negative answer elicited some disappointment, but after I explained that I was part of a group of artists with no funding, simply hoping to draw attention to homelessness in Seattle, someone raised his hand.

Simon, who has been homeless for 15 years, traced the root of his situation to run-ins with the law when he was growing up in Honolulu. He said he first got in trouble for stealing mopeds. Later in life, adversities piled up. He said he got shot in Las Vegas, suffered from drug addition and is currently battling throat cancer.

When I asked Simon what could someone have done for him along the way to prevent him from becoming homeless, he shared this memory from his childhood: “I wish my grandfather would have taken me surfing more .... That would have kept me out of trouble.”
Posted by Gabriel Campanario