Two distinctive and strikingly different churches dominate the South Lake Union area’s historic Cascade neighborhood. The most eye-catching is St. Spiridon Russian Orthodox Cathedral, with its deep blue onion domes. Since I’d sketched St. Spiridon about a year ago (and since I should have been home packing my bag instead of sketching with Urban Sketchers Seattle this morning and was short on time), I decided to focus on the second church: Immanuel Lutheran.

Completed in 1912, the church has been on the historic register since 1982. Although it doesn’t look like anything I’ve sketched in Europe, the round and arched windows evoke the same architectural details I saw on Gothic buildings in Spain and Germany. It’s exactly the kind of building that makes me freeze with the deer-in-the-headlights look if I try to go at it with a fine point pen. But with only an hour to sketch, I immediately pulled out my brush pen to hit it as hard and fast as possible. It’s probably a good strategy even when I can be more leisurely.

The rain earlier in the morning may have kept some sketchers away, but the seven of us who showed up shared sketches afterwards at Espresso Vivace. Those blue onion domes captured a lot of attention! 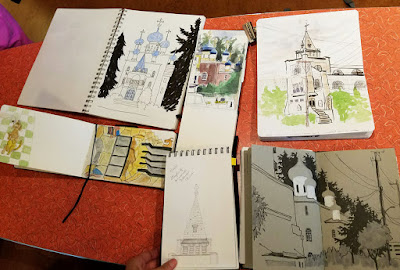