Bradner Gardens is Full of Surprises

Proposing a sketch outing at a location I haven’t been to before can be risky, but the photos looked inviting, so I took a chance on Bradner Gardens Park. Along with the other Friday sketchers, I was delighted to find this well-designed pea patch to be full of surprises.

For one thing, there’s a windmill, which I sketched first from my car while the morning was still a little chilly. It was already warming up by the time I finished, so I got out of the car and captured one of the many imaginative scarecrows populating the gardens. Dressed in a corporate shirt and tie (and fly unzipped), this scarecrow was apparently inspired by a former Seattle mayor, Kate had heard. (We both noted that the scarecrow has two faces – one on either side of his head! Hmmm.)

The gardeners who work this pea patch have so many luscious flowers and vegetables growing that I wandered for quite a while trying to choose one for my last sketch. The gorgeous green peppers near the restroom caught my eye – the shapes and colors so vibrant. 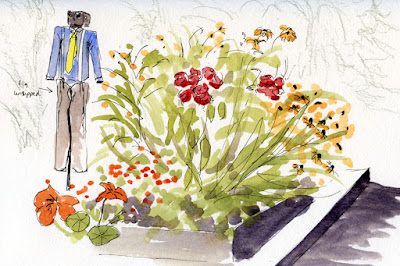 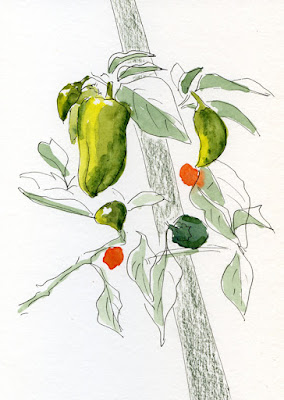 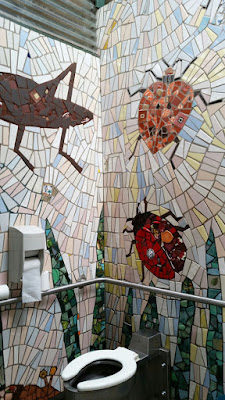 Speaking of the restroom, I found a surprise there, too. From the outside, it looks like your typical drab, unattractive concrete box often found in city parks. But inside was a mosaic covering the walls with huge insects and other garden motifs. The wall placard said that the mosaic was made and donated by Friends of Bradner Gardens volunteers. 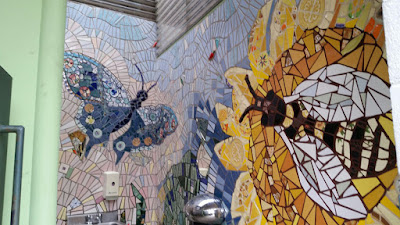