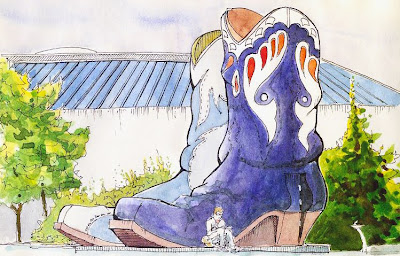 Went to Georgetown (Seattle) and stumbled across the landmark Hat and Boots. Once a gas station and part of a western themed shopping complex called Frontier Village in the 1950's, the hat (not shown) was the cashier stand and the boots were the men and ladies restrooms. They were rescued from a dilapidated state by volunteers and relocated to Oxbow Park.

When I first arrived a family of four were having a picnic on the toe of the first boot. The hat is placed quite a ways from the boots and will have to be a separate sketch another day.